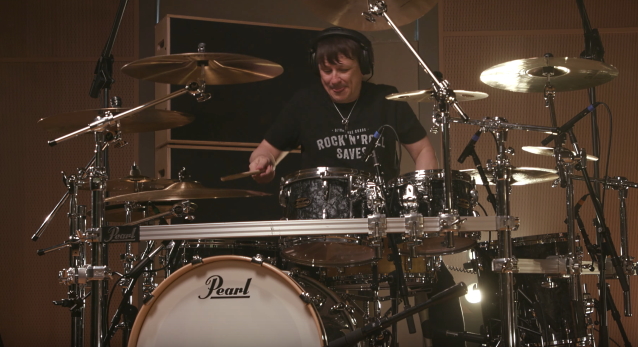 Sweetwater has uploaded a drum plathrough video of KORN drummer Ray Luzier playing along to the band's song "You'll Never Find Me".

"You'll Never Find Me" is taken from KORN's latest album, "The Nothing", which came out in September 2019. The disc debuted at No. 8 on the Billboard 200 chart with 33,000 equivalent album units earned (of which 29,000 were in album sales) in its first week of release.

"The Nothing" was released via Roadrunner/Elektra. The follow-up to 2016's "The Serenity Of Suffering" was once again produced by Nick Raskulinecz.

Last September, Luzier told the Philadelphia radio station 93.3 WMMR that he was working on a "rock book." He explained at the time: "It's not about, like, 'Oh, Mr. Rock Star guy.' It's about getting signed, getting dropped, getting this promised this and then me joining national bands. But 50 percent of my book is David Lee Roth, 'cause eight years with that guy, you can't make that stuff up. And I love him to death — he's the most amazing, one of the best entertainers ever. But there's a lot there — there's a lot of content.

"A lot of people don't realize out there, they think your favorite band, they just think, 'Oh, they got signed and they're huge and they're famous.' A lot of people don't have any idea what some of us go through," he continued. "I did the hard road. October starts my 14th years with KORN, which I'm super stoked to still be in and we're still around. [KORN bassist] Fieldy told me we had a year in '07 when I got the gig. He was, like, 'Yeah, we've got about a year left.' And here we are, still making music and we're gonna be touring when this whole virus crap is over.

"People have no idea, so that's why I told myself I'm just gonna put a book together that's gonna be about the realism of getting promised all this stuff," he added.

"Practicing and getting really good at your art is just one part of the whole equation."

First-call touring and session drummer, Luzier is known for his high-profile gigs with Roth, Jake E. Lee and ARMY OF ANYONE. From movie soundtracks to rock and metal albums, Luzier's playing can currently be found on over 70 recordings. As an educator, he was a Musicians Institute instructor for over 10 years and author of a well-regarded, self-titled instructional DVD.