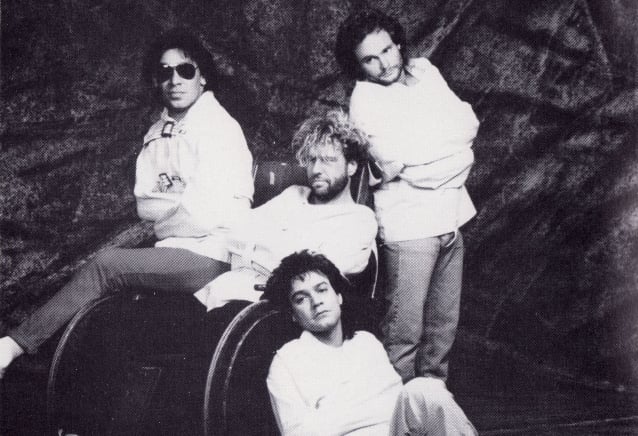 Ex-VAN HALEN bassist Michael Anthony was interviewed for a recent episode of "Steve Gorman Rocks!", a Westwood One five-hour weeknight program for classic rock stations, hosted by the former drummer and founding member of THE BLACK CROWES.

Recounting the first time he met Sammy Hagar prior to the singer joining VAN HALEN as the replacement for David Lee Roth in 1985, Anthony said (as transcribed by BLABBERMOUTH.NET): "I'd obviously seen Sammy play a few times. I never actually paid too much attention. Yeah, his stuff [was] great. I liked the MONTROSE stuff. Obviously, he had his solo stuff going on. But the first time I actually met him, I was in the studio at Ed's [Van Halen, VAN HALEN guitarist] house, the 5150 studio, and Sammy, I guess, was on a break. He had cut all his hair off. And he comes walking into the studio. I was sitting there in the studio, and he comes walking in. And I go, 'That's not Sammy Hagar. He's the guy with long hair.' And we instantly became friends."

Asked how long it took for him and the other members of VAN HALEN to realize that Hagar was going to be the band's the new singer, Anthony said: "We played probably for about 10 minutes tops, and we knew that we had something happening. We had a couple of songs that would end up on the '5150' record; I think they were 'Good Enough' and… There was another one; there was a couple of them that were pretty much written. And we played it for him, and we said, 'Just sing. Just sing something.' And there were bits that he actually sang that ended up — and I kid you not — on the album. The chemistry was just such, like, 'Wow!'"

According to Anthony, not everybody was instantly sold on the idea of Hagar replacing Roth in VAN HALEN. "We had everybody — [our record label] Warner Brothers, our management, our lawyers — going, 'Oh my God. David Lee Roth's gone.' They thought that that was such a strong identity," he said. "Warner Brothers wanted us to change the name of the band. I remember Eddie and Alex [Van Halen, VAN HALEN drummer], we were at Warner Brothers, and they were yelling, going, 'Hey, hey, this is our last name. This is our careers. And we're VAN HALEN.'"

In a 2020 interview with Ultimate Classic Rock, VAN HALEN's longtime producer Ted Templeman admitted that he also initially had reservations about Hagar joining the band. "I wanted them to change the name," he said. "When I first sat down with Sammy and his manager, I said, 'Call it something else if you're going to be in the band. It's just not VAN HALEN without Dave to me.'"

Hagar, Alex, Eddie and Anthony last teamed up in 2004 for a U.S. summer tour. In exchange for taking part in the tour, Anthony reportedly had to agree to take a pay cut and sign away his rights to the band name and logo.

🚨 TONIGHT! 🚨 Michael Anthony's talking about the first time he played with Sammy Hagar as new frontman of Van Halen, plus much more! Don't miss the interview tonight on Steve Gorman Rocks!