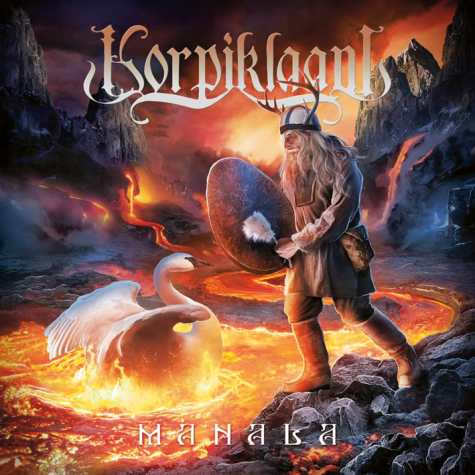 Anthony Morgan of Metal Forces recently conducted an interview with bassist Jarkko Aaltonen of Finnish folk metallers KORPIKLAANI. A couple of excerpts from the chat follow below.

On the departure of violinist Jarkko Lemmetty:

Jarkko Aaltonen: "Everything was becoming more and more difficult for him. He didn't really get into rehearsals anymore, and then when we were doing live shows, he was playing less and less. He became less and less interested in doing anything, and then he started to miss shows. We felt that it would be better if he departed. When you've been together with someone for so long, it's not a marriage, but it's close. It was quite difficult to bring up this subject, to say words that no one wants to hear: 'We have to part.' I think everybody, though, including him, was quite relieved that the issue was addressed. It was nothing personal; we had to do what we do. If you cannot do what you're supposed to do or if you don't want to do that, then you should stop being a musician."

On being viewed as a comedic act in some quarters due to recording several drinking-related tracks:

Jarkko Aaltonen: "I'm surprised that you noticed. It is annoying, but there are so many people who judge the band by the song 'Vodka' or whatever. It annoys me and it annoys us, but then again we wrote those songs. We released those songs, so who the hell are we to complain? It will be interesting to see how this album is received since, as I said, there are no drinking songs on the album. The songs are way more serious, doomier, heavier, thrashier, so it will be sort of interesting to see if this will be more of a doom album because it has no drinking songs."

On the title of latest album, "Manala":

Jarkko Aaltonen: "The album is named after Manala — also known as Tuonela — which is the Finnish world of the dead. It's a place for the dead in Finnish mythology. There wasn't the whole concept of Heaven and Hell — there was no Heaven or Hell. Everybody who died went to Manala; regardless of how they lived their life, everybody ended up in the same place. Those who did commit crimes or whatever, they were called at the time possibly had some evil spirit following them all of the time, but that's all it was. Finnish mythological stories say that it was possible to travel between the underworld and the regular world. For example, there's a song on the album about how at a certain time of the day you can actually see the Bringer Of Death on Earth and that kind of thing. It's a bit of a gloomy album in that sense, lyrically, I think. It's an interesting concept, I think."

Jarkko Aaltonen: "When I heard the rough version of 'Ukon Wacka', I listened to the songs in the correct order and everything. I got this sort of rock 'n' roll feel from that, and that it defined what the hell this thing is called rock 'n' roll. I feel that it had the same kind of… Like MOTÖRHEAD albums. It doesn't matter if the album's from 1980 or 2010, because they always have this rock 'n' roll feel to them. I had that same feeling about the previous album, and now with this new album I get this really, really thrash metal feel — totally different than the previous one. The previous one felt more relaxed, more rolling — as I said, rock 'n' roll — and this one feels a lot thrashier. I don't think it's anything much different than the previous one, but that's what I feel. It's always different though for others who haven't been playing or rehearsing those songs; they always hear them with fresh ears."

On recording an English version of "Manala" (a bonus disc entitled "Underworld"):

Jarkko Aaltonen: "The original idea came from the fact that everybody kept asking us. Not everybody, but mostly Americans. They kept bugging us about that, so we had the original idea to make a test. To release two albums the same day, the English version and the Finnish version, and see which sold more so we could tell the Americans to shut the fuck up. Then we realized that it was a shit idea, because that would basically force the people who wanted to buy our album to buy two albums. We decided to do it the way it is now. We recorded the Finnish version originally, and then we recorded the entire album in English and added those tracks as bonus tracks on the standard release. This way, everybody gets what they want. Some people get the Finnish version as well as a really, really cheap bonus album. That's what we ended up doing. If we had known how much work it would take to actually translate the lyrics and make them singable, then we probably wouldn't have done it. That was a shitload of work."