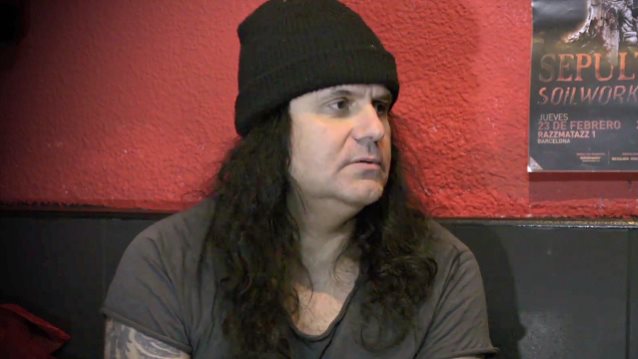 KREATOR Frontman On Producer JENS BOGREN: 'He's Very Much A Team Player, But Sometimes He's Not'

On January 6, Rustyn Rose of Metalholic conducted an interview with guitarist/vocalist Mille Petrozza of German thrash metal veterans KREATOR. You can now listen to the chat in the YouTube clip below. A couple of excerpts follow (transcribed by BLABBERMOUTH.NET).

On whether it seems surreal to think that KREATOR has been around for 35 years already:

Mille: "It is. I don't even think about it. Once you start thinking about it, it makes you feel old-ish. [Laughs] But it's something… To me, I live in the moment. And I'm more than thankful that I am still doing this after all this time, and being able to really, really be healthy and be happy. Kind of living the dream — if I'm not traveling and waiting in airports and going for my 'Spinal Tap' moments that every band will experience. But other than that, I'm really happy about how things developed with the band and how we evolved as musicians and that we still have so much support from fans from all over the world."

On whether he would agree that KREATOR's new album, "Gods Of Violence", is a more melodic effort than some of the band's other recent albums:

Mille: "My perspective of the album is it has a lot of variety, which also contains, of course, the melodic part of it. The melodies, of course… Whatever happens, we do whatever makes the songs stronger, so in order to make the album exciting from start to finish, there are songs like, for example, the opening song, 'World War Now', which is a straight-up thrash metal song — not so many melodies involved on this one. But then, of course, as the album continues, it has more melodic stuff like 'Satan Is Real'. Some of the other songs towards the end of the record are also very melodic. Everything that just excites us and everything that we thought was worth it to be on the record ended up on the record."

Mille: "Oh, he's very critical, and he's very much a team player, but sometimes he's not. He's very stubborn. He has a vision. Once you start working with him, he already has a vision of how the record's gonna sound, and he's kind of, like, leading you through the process, which is something every producer should do. He's a good producer. He's one of the best ones I've ever worked with."

"Gods Of Violence" will be released on January 27 via Nuclear Blast Records. The cover artwork for the album was created by renowned artist Jan Meininghaus, who also made the limited-edition artwork for KREATOR's last disc, 2012's "Phantom Antichrist", and has lent his talents to bands like BOLT THROWER, ACCEPT and OVERKILL in the past.