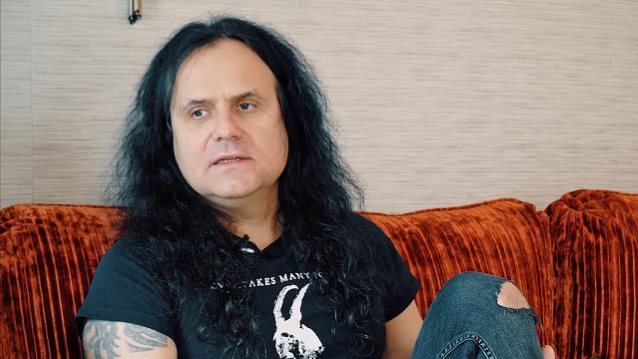 KREATOR Frontman On Threat Of Terrorism: 'We Should Not Be Afraid Of Anyone'

France's Duke TV recently conducted an interview with vocalist/guitarist Mille Petrozza of German thrash metal veterans KREATOR. You can now watch the chat below. A couple of excerpts follow (transcribed by BLABBERMOUTH.NET).

On the topic of terrorism as it relates to KREATOR's new album, "Gods Of Violence":

Mille: "The way terrorism works nowadays, as we saw in the [case of the] Bataclan [terror attack in 2015], it's random. It got to every… It got into the subcultural world, where it shouldn't be, because these people are not even terrorists, in my opinion; those people are just crazy. So you never know what's gonna happen next, but I think we should not be afraid of anyone — neither of terrorists, nor of what's gonna happen in the world of politics. We should enjoy life while we have it. And that's the message, if there is any, of the album."

On managing to stay relevant after making albums for more than thirty years:

Mille: "It's very hard, when you have thirteen albums that you have recorded in your past, to stay relevant. I think you always have to question yourself. You always have to ask yourself, is it really necessary to release another album, or did I say everything that has to be said, or had to be said? And when I wrote those songs for 'Gods Of Violence', I asked myself this question, of course. And sometimes I feel very insecure. When I start writing the riffs, I'm, like, 'Maybe I've done this before,' or, 'Maybe this is not good enough,' or, 'Maybe this is not strong enough,' but in the process you become more self-conscious."

"Gods Of Violence" will be released on January 27 via Nuclear Blast Records. The cover artwork for the disc was created by renowned artist Jan Meininghaus, who also made the limited-edition artwork for KREATOR's last album, 2012's "Phantom Antichrist", and has lent his talents to bands like BOLT THROWER, ACCEPT and OVERKILL in the past.

"Gods Of Violence" was once again recorded at Fascination Street Studios in Örebro, Sweden with producer Jens Bogren, who has previously worked with OPETH, AMON AMARTH, KATATONIA and SEPULTURA, among others.