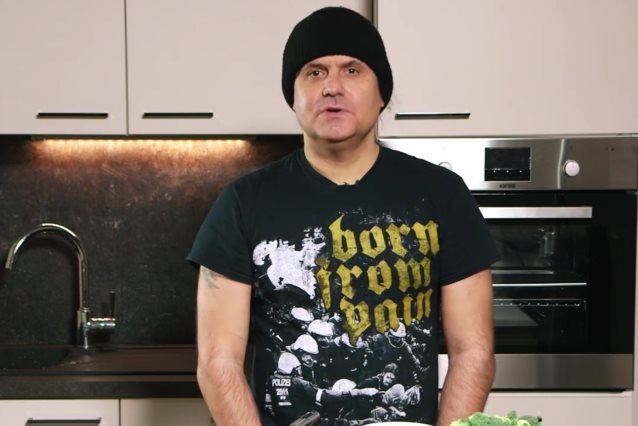 PETA Deutschland has uploaded a video clip of Miland "Mille" Petrozza of German thrashers KREATOR cooking his favorite vegan curry. Check it out below.

Asked by Noisey in a recent interview if people are ever surprised that KREATOR's lead singer is vegan, Mille said: "Not in this day and age, man. There's so many vegans nowadays, it's become kinda trendy. People are interested more than anything. Even people who aren't vegan love vegan food! Of course the whole world will never become vegan, even though it'd be better for the planet, but it's an interesting genre of food, so to speak."

KREATOR's new album, "Gods Of Violence", was released on January 27 via Nuclear Blast. The cover artwork for the disc was created by renowned artist Jan Meininghaus, who also made the limited-edition artwork for KREATOR's last album, 2012's "Phantom Antichrist", and has lent his talents to bands like BOLT THROWER, ACCEPT and OVERKILL in the past.

Miland "Mille" Petrozza of Kreator is cooking his favorite #vegan curry for YOU!