Veteran German thrashers KREATOR joined forces with Nagel, singer of MUFF POTTER (a German-speaking punk band from Rheine and Münster in Northrhine-Westphaliato),last summer to record a cover of SLIME's "Alle Gegen Alle" for the upcoming "Tribute to Slime" compilation. Vocals on the track are shared between KREATOR mainman Mille Petrozza and Nagel.

A two-minute video clip shot during the August 2008 recording sessions can be viewed below.

SLIME was a German punk rock band which existed between 1979 and 1994. They were very influential to the German punk culture and their first album, "Slime I", was reportedly the first German punk album to get banned.

In addition to the KREATOR/Nagel collaboration, "A Tribute To Slime" will feature contributions from DIE TOTEN HOSEN, RASTA KNAST, DRITTE WAHL, DIE MIMMIS, DIMPLE MINDS and EMILS, among many others. A May 8 release via Sunny Bastards is expected. 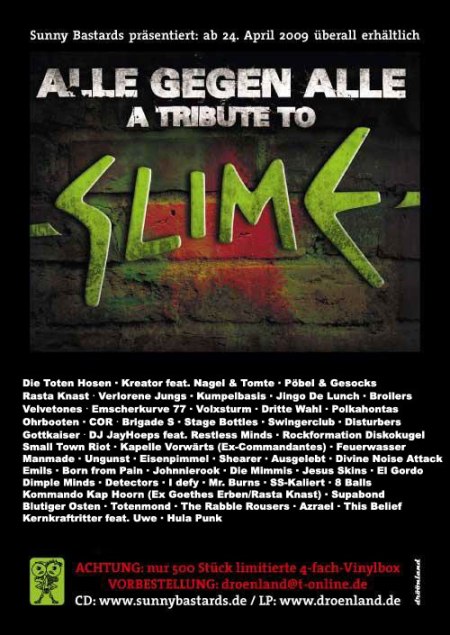