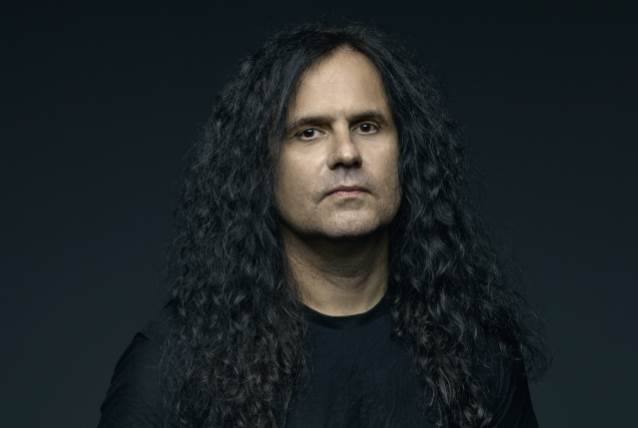 German thrash metal veterans KREATOR will take 2019 off from touring to focus on writing the material for the follow-up to 2017's "Gods Of Violence" album. "We will not play any festivals next year," KREATOR frontman Mille Petrozza told Guitar Interactive magazine (see video below). "We might do a little bit, but not much. Basically, we have next year off to write. I'm planning on releasing something in the summer of 2020."

Asked why it took five years for KREATOR to release the follow-up to 2012's "Phantom Antichrist" record, Mille said: "[We had a] similar problem [as] we have now. When we dropped 'Phantom Antichrist', we were constantly touring, and I need time off for inspiration. If I'm always on the road, I'm not inspired, because it's almost like you function, but you don't really live your life — your life's on hold, so to speak. So next year I'm gonna take a year off to write new music, which is gonna be exciting. When you're on the road, it's fun to perform — don't get me wrong — but the creative process is what I… that's why you're a musician."

Petrozza also elaborated on why it takes KREATOR so long to come up with new music. "I've written many, many songs — I just checked, and I've written more than 150 songs — so I need to make sure that the new songs don't sound like the old songs; that's a little tricky sometimes," he explained. "And come up with new topics [to write about]. But it always works. I just need to wait for the right moment."

Mille went on to say that "99 percent of the songs" are written by him. "On the last record, it was different; Sami [Yli-Sirniö, guitar] also has written some stuff. And the other guys never come up with a whole song, but sometimes they come up with great parts. That's where I'm, like… sometimes when I get lost, I'm, like, 'Ah, Sami has this great part for me, and maybe it fits in this song,' and that's how it works.

"As the guitar player and singer, I cannot have anyone else writing the songs, because I need to write for my style," he continued. "So if I have a riff that's very complicated, I cannot sing over it. So I need to attach it to the vocals. It's a long process."

"Gods Of Violence" entered the official chart in Germany at position No. 1. The cover artwork for the album was created by renowned artist Jan Meininghaus, who also made the limited-edition artwork for "Phantom Antichrist" and has lent his talents to bands like BOLT THROWER, ACCEPT and OVERKILL in the past.