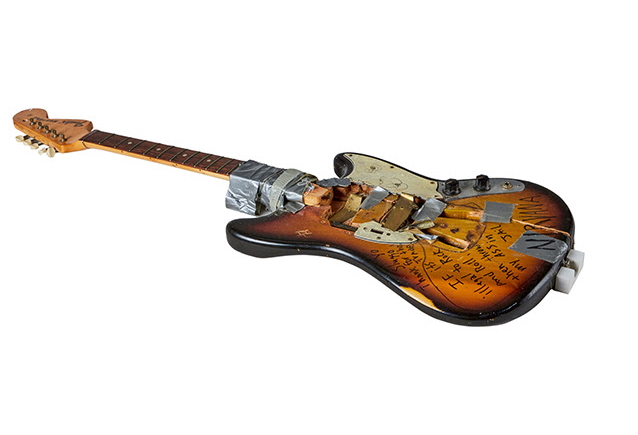 One of the highly anticipated moments of the weekend was the sale of the 1973 Fender Mustang owned, stage-played, smashed and signed by NIRVANA frontman Kurt Cobain which was sold for an astounding $486,400 (original estimate: $200,000). The axe was used on NIRVANA's first U.S. tour at two performances in 1989–the first at Club Dreamerz in Chicago, Illinois on July 8, and the second at the Sonic Temple in Wilkinsburg, Pennsylvania on July 9 — where Cobain smashed the guitar to pieces across the stage during the finale performance of "Blew". Following that performance, the band stayed at Sluggo Cawley of the band HULLABALOO's apartment, where Cobain noticed a smashed Gibson SG hanging on Cawley's wall. Cobain offered to trade it for the Fender Mustang he had smashed on July 9 because he thought he could repair the Gibson SG well enough to smash it again later on. Sluggo agreed to the trade and had Cobain inscribe the Mustang, signing as NIRVANA and additionally drawing two flowers along the upper right portion of the pickguard before the band moved on to their next show. Along the lower portion of the body, the inscription reads, "Yo Sluggo / Thank for the trade/ If its illegal to Rock and Roll, then throw my ass in jail/ Nirvana."

"All of the greats were well represented in Julien's annual fall classic Icons & Idols Rock N' Roll event and this year's lineup produced one of our biggest auctions yet with over 1,500 exceptional artifacts sold," said Martin Nolan, executive director/CFO of Julien's Auctions. "Additionally, we were proud to help raise funds for charity with the proceeds of many of these incredible items going towards supporting Gibson Gives, MusiCares, Music Support, and others."

Julien's Auctions is the world-record breaking auction house. Collaborating with the famous and the exclusive, Julien's Auctions produces high profile auctions in the film, music, sports and art markets. Julien's Auctions has received international recognition for its unique and innovative auction events, which attract thousands of collectors, investors, fans and enthusiasts from around the world. 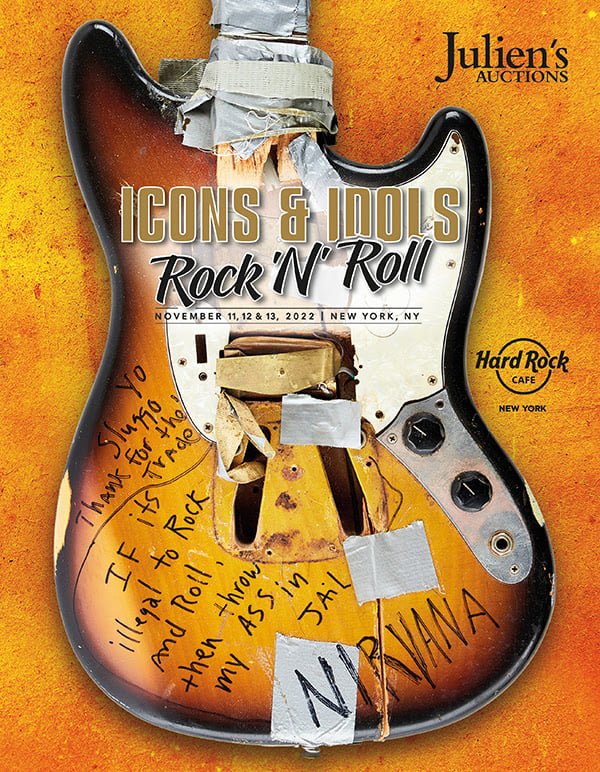