The orange Boss DS-1 pedal was used by Cobain on stage while performing with NIRVANA on the band's "Nevermind" tour at Club Babyhead in Providence, Rhode Island, on September 25, 1991. The pedal has red tape all over the bottom to secure it to the stage. It was accompanied by a signed letter of authenticity from Jeff Toste, an audience member, who states that Cobain was having technical problems during the show and smashed the pedal on stage, then threw it into the crowd. Toste was the recipient of the discarded pedal.

The previous record was $3.95 million for a Black Stratocaster owned by PINK FLOYD's David Gilmour.

The buyer was Peter Freedman, founder of RØDE Microphones, who attended the live auction in Beverly Hills and successfully won the guitar in a bidding war among collectors and bidders all across the globe who participated live on the floor, online and on the phone.

Freedman plans to display the guitar in a worldwide tour of exhibitions to be held in distinguished galleries and art spaces, with all proceeds (including the guitar) going to the performing arts.

Other NIRVANA items sold at the auction included a signed "Nevermind" poster ($56,250); the camera, original negatives and signed original prints, and the copyright from NIRVANA's 1992 SPIN magazine photoshoot ($35,200); and NIRVANA all-access passes ($512 each). 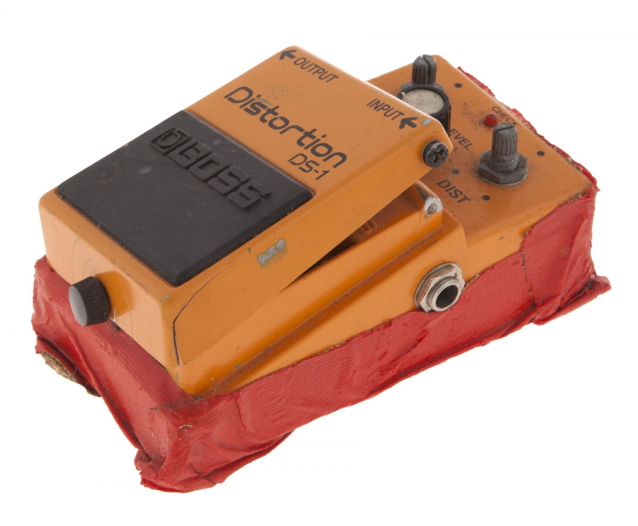