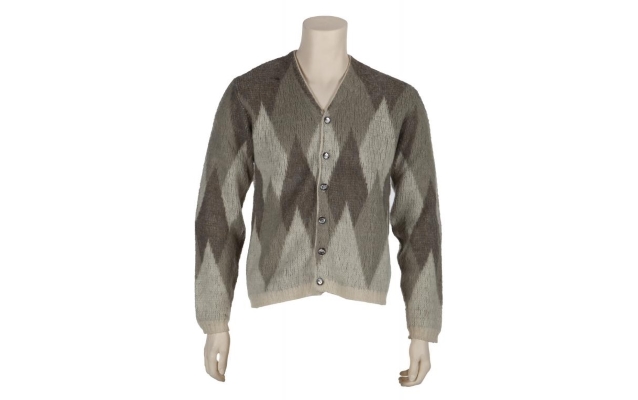 The top-selling item of the auction was the sale of a Universal Audio Console 610a from Bill Putnam's legendary Western Recorders Studio #2 that was used to create iconic pop recordings such as Frank Sinatra's "Strangers In The Night", THE BEACH BOYS' "Barbara Ann", Ricky Nelson's "Fools Rush In", Wayne Newton's "Danke Shoen" as well as the theme songs to "The Beverly Hillbillies", "Green Acres" and "Hawaii Five-O" and more, which sold for $370,000.

The one and only Prince reigned over the auction stage with several of his most iconic items heading to auction for the first time, including his 2004 "Musicology" tour stage-used black Taylor 612-CE acoustic guitar that sold for $89,600. Other Prince auction highlights included a purple stage-used drumhead from Prince's "Purple Rain" tour signed in black marker "Love God Prince" in the center with his signature and autographs from THE REVOLUTION band that sold for an astounding $40,625 — twenty times its original starting estimate of $2,000 — as well as two tour-used tambourines that sold for $7,680 each

One of the most talked about items of the auction — an acrylic and mohair cardigan worn by Kurt Cobain in his last NIRVANA photoshoot with photographer Jesse Frohman — sold for $75,000, well over its original estimate of $20,000. Frohman was commissioned to shoot NIRVANA for the album cover of "In Utero", released on September 21, 1993.

Another NIRVANA auction stunner included a used paper plate, which Kurt Cobain had eaten pizza on with a handwritten set list in black marker by Cobain used at the 9:30 nightclub in Washington, D.C. in 1990 (estimate: $1,000-$2,000),which sold for an astounding $22,000!

A black, red and gold military style jacket worn by Michael Jackson sold for $76,800. The King of Pop wore the jacket when he attended a private birthday party for President Nelson Mandela in 1996. A Gibson V Guitar featured in "Scream", Jackson's music video with Janet Jackson, also sold for $19,200; an iconic pair of black Florsheim loafers autographed by the late pop star also sold for $10,240.

The Queen of Pop's most signature looks were some of the show-stopping auction items, including Madonna's "Alaia Paris" greenish-gold silk low-cut halter wrap dress worn on the cover of the July 1987 Cosmopolitan magazine that sold for $53,125, seven times its original starting estimate of $8,000 and her vintage red and white foliate print crepe dress worn as Eva Peron in "Evita" that sold for $7,680. A group of 12 large-format black and white photographs of the Material Girl taken by Herb Ritts during the San Pedro session in 1990 also sold for $12,800, six times its original estimate of $2,000.

QUEEN's gear used to record some of their definitive hits and Freddie Mercury's iconic fashions were the champions, including an Oberheim OB-Xa synthesizer that was used by the supergroup to record their 1984 single "Radio Ga Ga", which sold for $25,000 (well over its estimate of $8,000) and a Freddie Mercury signed and worn black silk shirt seen in the video of Mercury's last filmed performance in the 1991 QUEEN single "These Are The Days of Our Lives" that sold for $54,400 (estimate: $15,000-$20,000).

Other top auction highlights included Neil Diamond's personal 1956 White Ford Thunderbird, two-seat roadster convertible (whose sale proceeds will benefit MusiCares) that sold for $75,000; Johnny Cash's Bentley model 5106 acoustic guitar that sold for $37,500; Bob Dylan's handwritten and signed lyrics to his 1965 single "Like A Rolling Stone" on hotel stationery that sold for $70,400; the Rocketman Elton John's custom-made silver satin suit worn on "The Russell Harty Show" in 1974 which sold for $21,875, and his pair of gold-toned wire-rim round glasses worn on the cover of his 1995 "Made In England" album and to the 67th Academy Awards on March 27, 1995 that sold for $16,000.