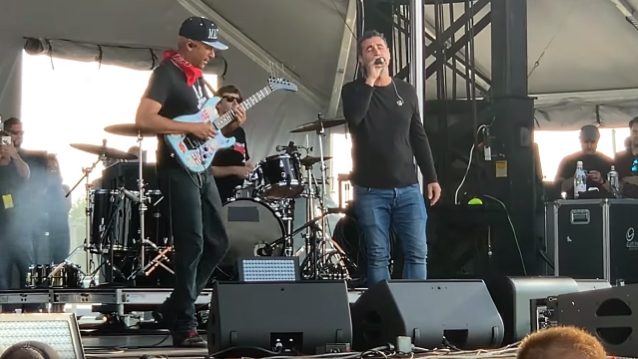 SYSTEM OF A DOWN frontman Serj Tankian joined Tom Morello on stage on Friday, May 17 at the Sonic Temple Art + Music Festival in Columbus, Ohio to perform AUDIOSLAVE's "Like A Stone" as a tribute to Chris Cornell. Fan-filmed video footage of the performance can be seen below.

AUDIOSLAVE featured Cornell alongside RAGE AGAINST THE MACHINE members Tim Commerford (bass),Morello (guitar) and Brad Wilk (drums). The latter three are all in PROPHETS OF RAGE, alongside PUBLIC ENEMY's Chuck D and CYPRESS HILL's B-Real.

Tankian and Cornell last saw each other in April 2017 when both attended a red-carpet premiere in Los Angeles for "The Promise", a historical drama about the Armenian genocide. Both men had recorded music for the film. "He was doing great, doing press – fighting the good fight" for the project, Tankian told Rolling Stone. Cornell was "one of those guys," he added, who "tried to make everyone in the room feel comfortable with themselves. He was generous that way, with his emotions and time."

Prior to that, Tankian and Cornell were guests at a star-studded 70th-birthday gala thrown by Elton John in L.A.

"We had this long chat, sitting next to each other," Tankian remembered. He and Cornell talked about touring. "For myself, it's fun but nothing new under the sun," Tankian admitted. Cornell "was just the opposite: 'I'm really excited. I'm doing this tour with SOUNDGARDEN. I've got these other ideas.' He had plans, man."

AUDIOSLAVE performed together for the first time in over a decade in January 2017, reuniting at the Teragram Ballroom in Los Angeles as part of the Anti-Inaugural Ball, a star-studded concert protesting the swearing-in of Donald Trump as the nation's 45th president. The band played three of its best-known songs: "Cochise", "Like A Stone" and "Show Me How To Live".

Cornell was found dead in his hotel room after performing a show with SOUNDGARDEN in Detroit on May 17, 2017. Officials later confirmed he had hanged himself.