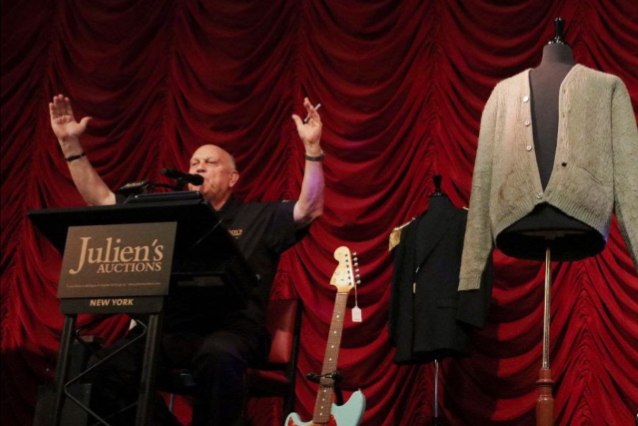 Julien's Auctions, the world-record breaking auction house, held its marquee two-day music auction event "Icons & Idols: Rock 'N' Roll" on Friday, October 25 and Saturday, October 26 live in Hard Rock Cafe New York and online at JuliensAuctions.com in front of a buzzing crowd of collectors and music fans bidding live on the floor, online and on the phone across the globe for over 700 items owned and used by a who's who of music legends including Kurt Cobain, Elvis Presley, THE BEATLES, Michael Jackson, Madonna, QUEEN, Bob Dylan, Jimi Hendrix, Eric Clapton, Bruce Springsteen, Elton John, Janis Joplin and more.

One of the highly anticipated moments of the weekend was the headline making sale of the vintage, olive green cardigan worn by one of the most influential artists of the 20th century, Kurt Cobain. Considered one of the most famous sweaters in music history, Cobain wore the Manhattan brand acrylic and mohair cardigan with a burn hole on his iconic televised performance with the group NIRVANA on the television series "MTV Unplugged In New York" and its accompanying album recorded nearly 25 years ago on November 18, 1993. The sweater sold for an astounding $334,000 (estimate: $200,000-$300,000) and marks a milestone moment in the grunge alternative rock icon's life and legacy as he died just four months before the 1994 release of NIRVANA's "MTV Unplugged In New York" album, considered by music critics as one of the greatest live albums of all time. The other top highlight of the auction also came from the NIRVANA frontman with the sale of his left-handed Fender Mustang guitar realized at $340,000. The custom-built guitar in turquoise with red mottled pickguard was played by Cobain during NIRVANA's "In Utero" tour in 1993 and was exhibited at the Rock And Roll Hall Of Fame from 2002 to 2011. Accompanying the guitar is a handwritten letter signed by his wife Courtney Love Cobain stating that this was one of Cobain's favorite guitars.

The cardigan first sold at auction in 2015 for $137,000. The most recent owner of the sweater was apparently a businessman who preferred to remain anonymous. He kept the piece of unwashed clothing stored in acid-free tissue in a safe.

Earlier this year, another Cobain cardigan from the "In Utero" era also sold for $75,000.