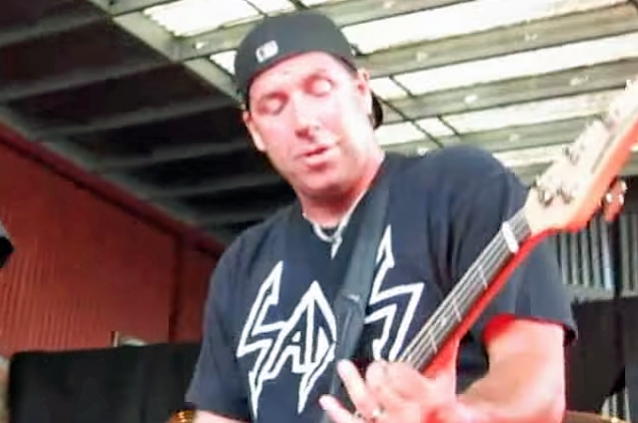 LÄÄZ ROCKIT vocalist Michael Coons posted the following message on his official Facebook page: "In shock… the important thing is to honor Willy and his family at this time. I will get back to all of you when I'm able to… too difficult right now to do so, please understand."

TESTAMENT frontman Chuck Billy, who played with Willy in DUBLIN DEATH PATROL, wrote: "Today I lost my best friend. Willy, you have always been the person in my life that has been there for me and I love you for that. I will alway have you in my heart and soul and treasure all the great times we had with you and Kelly in this life. Until we see each other again on the other side and have a great reunion. You rest in peace, my friend."

Former VIO-LENCE and current MACHINE HEAD guitarist Phil Demmel wrote: "We lost a Dublin legend in shocking fashion. Willy Langenhuizen was taken from his loving family and our town is left with a huge void. One of the nicest, most caring and friendly dudes. Will was someone I looked up to and respected, especially in my early years of playing, as he was already in established bands playing clubs. That helped introduce me into a scene that would become my life. Watching and meeting SLAYER as the opener for Willy's band LÄÄZ ROCKIT. After Lars [Ulrich, METALLICA drummer] ripped on LÄÄZ on Rampage Radio, Will waged war on METALLICA, claiming the Dublin Death Patrol doesn't fuck around. Pretty sure Lars called for a truce and then later [Willy] almost got the bass gig after Cliff [Burton] died! I played in a few City Hoops leagues with him and he hated to lose, played hard and shot lights out from downtown. Same with golf — dude was a natural.

"All of my heart goes out to Kell and their kids and for them to know how much we ALL care and will be there to support.

"Goodbye, Willy. Thank you and rest in peace."

Former TESTAMENT and current TRAUMA bassist Greg Christian also commented on Willy's passing, writing: "Rest in peace, Willy Lange!! I'm still kind of in disbelief. I haven't seen him in about five years, but I always liked Willy. He was cool. It sucks I won't see him again.

"Also, I want to say, Willy got LEGACY [the band that evolved into TESTAMENT] our first real show back in '84… The Stone with LÄÄZ ROCKIT and SLAYER. I'm thankful and appreciate that Willy did that for us. And never forgot. It was a good thing. Anyway, I'm still stunned here and don't know what to say. Except this is sad news. Truly.

Lange joined LÄÄZ ROCKIT in 1983 and appeared on the band's first four full-length studio albums — "City's Gonna Burn" (1984),"No Stranger To Danger" (2005),"Know Your Enemy" (1987) and "Annihilation Principle" (1989) — before exiting the group in late 1989. Lange rejoined LÄÄZ ROCKIT for a 2005 reunion performance at the Dynamo Open Air festival in the Netherlands and a new LÄÄZ ROCKIT studio album, "Left For Dead", which came out in 2008.

Lange is not the first member of LÄÄZ ROCKIT to die at an early age. Drummer Victor Agnello passed away on June 1, 2014 following a battle with leukemia. He was 50 years old.