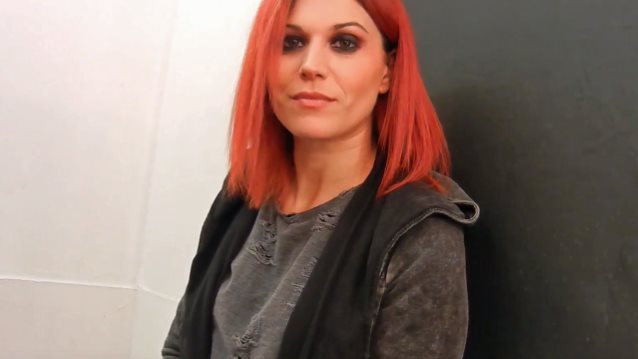 LACUNA COIL frontwoman Cristina Scabbia has weighed in on underdog Donald Trump's stunning upset of Hillary Clinton in the U.S. presidential election, saying that she was "really surprised that Trump won" and expressing hope that "everything will be okay" under the new administration.

Speaking to Metal Wani, Scabbia said (see video below): "I really, really hate politics. I strongly, strongly hate politics. Let's say that I hate extremisms from politics [and] religions. Especially for politics, I feel that we basically know nothing. We can be as informed as we want, but there are some things happening in the system that we will never know. So I really hate it when politics is really dividing people even more."

She continued: "I'll give you the stupidest example… I was really surprised that Trump won, because I was absolutely sure that Hillary would win, just because the polls showed she was the winner, and I would hear people saying, 'Fuck Trump! Trump will never win.' Blah blah blah. But, as it always happens, the favorite loses. So I posted on my social [media sites] — which I never do, because I never talk about politics — I just posted a black picture with [the caption] 'Wow!', because I was seriously genuinely surprised. And I also did it on purpose because I really wanted to see all the comments down below the picture, showing what people perceive from whatever you do. And that's kind of how politics works. I basically didn't say anything — it could have been everything — but some people commented, like, 'Fuck you, liberal! We won. Fuck you! Get out of the country.' And I was, like, okay, first of all, you don't even know that I'm not American. I live in Italy, and I'm okay in Italy. But you're attacking me without even knowing my political view. And it was just interesting how much hate politics in general raise, and this is what I really, really don't like about politics."

Asked if she thought Trump's win will have an effect on LACUNA COIL's touring activities in the U.S., Scabbia said: "I don't know what will happen. Hopefully everything will be okay. I honestly don't know. Because, to be honest, we always entered [the country] legally, so I hope that they will appreciate this, and I hope that they will appreciate the fact that we are still working and bringing money to the States, which is a territory that we absolutely adore. I'm there very often for personal reasons and for touring, and I love to be there; it feels like a second home to me. So I hope that everyone will be safe."