Italian goth-metal icons LACUNA COIL have set "Visual Karma (Body, Mind and Soul)" as the title of their first-ever DVD, due in November via Century Media. The double DVD, which is a celebration of all things from the band's "Karmacode" album and subsequent touring cycle, will include:

* Remixed and remastered live performances recorded in 2007 at the Loud Park festival (Japan) and Wacken Open Air festival (Germany).
* The bandmembers' individual personal mini-movie features.
* All of the promo videos from the "Karmacode" album.
* Behind-the-scenes tour features filmed around the world.
* 10 competition-winning, fan-created videos.
* A link and key to the band's new album preview website!

A "limited-edition" four-disc package will include:

* A 5.1 mix of the "Karmacode" album on audio DVD.
* A bonus CD with the Wacken Open Air audio live material.

A detailed track listing and art information will be released shortly.

Commented band co-vocalist Andrea Ferro: "In the past, we've been asked a million times about when we were gonna put out a band DVD. Truthfully, we never felt like it was a priority, and we didn't want to release something just because the market was asking for it. The 'Karmacode' tour brought us to many different places around the world for the first time and we managed to record some of those great, outstanding shows, where the interaction with the people was just magic. This DVD is a beautiful reminder of where we have been in the past three years with all our body, mind and soul." 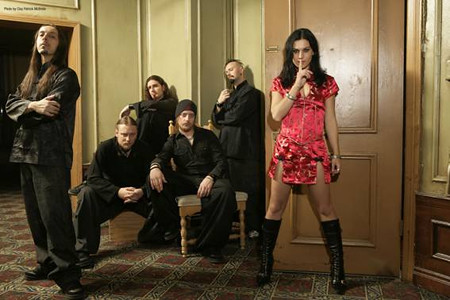