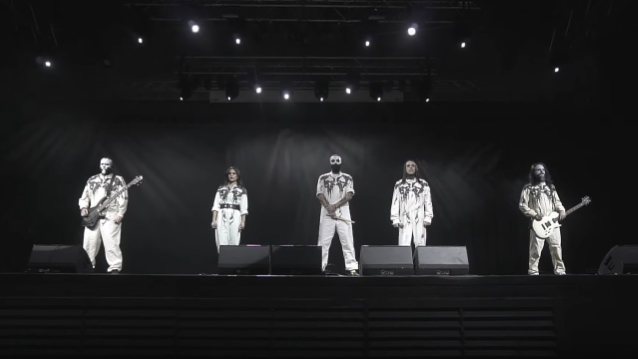 On Saturday, February 27, LACUNA COIL was among around 130 Italian artists and venues who participated in an initiative dubbed "L'Ultimo Concerto?" (Last Concert) to highlight the increasingly uncertain future of music venues. Instead of delivering live performances as part of a scheduled free virtual stream, each artist was filmed taking the stage at a different venue and then standing there in silence as a way of commemorating the one-year mark since the first Italian venues closed.

Organized by KeepOn Live, Arci, Assomusica and Live DMA, the campaign was announced last month when the venues shared images on social media of their year of foundation and the year 2021 with a question mark, suggesting that their closures due to the coronavirus pandemic could be permanent.

LACUNA COIL explained its participation in the initiative in a statement released shortly after Saturday's virtual event.

"You were expecting to see a live show while we just stood in silence," the group said. "It's not a bad joke. This is the situation of live clubs in italy. Places where we got to meet many of you.

"Thanks for being part of this, for your support, and for being there in this very moment which hopefully will be a turning point.

"From now on, we just want to talk about the next live show."

LACUNA COIL added in an Instagram post: "For those watching from all over the world, we're sorry you guys didn't get to see the show you were expecting. We just stood in silence, showing our support to the live club scene.

"Unfortunately, live clubs in Italy and the rest of the world have been closed for a year now, and there's no sign of re-opening anytime soon. We believe they should get the right attention and recognition, because that is what they deserve: to be considered as cultural spaces. Hopefully, this initiative will bring their uncertain situation to everybody's attention."

Between March and June 2020, the Italian government imposed a national lockdown by restricting people's movements to contain the pandemic. Thus, museums and cinemas closed and all cultural events were either canceled or rescheduled.

Around 300,000 people working in theaters, music venues, cinemas and cultural spaces in Italy have been rendered jobless since they shut their doors due to the coronavirus crisis.

The organizers of "L'Ultimo Concerto?" said in their mission statement: "When will the last concert be? Or maybe it has already been?

"Live clubs and concert halls carry the weight of almost a year of closure on their shoulders. Currently, despite the enormous role that these spaces have in terms of the creation, promotion and dissemination of culture and their indisputable social value, it can be said that they have been almost ignored by the numerous decrees that have followed one another in recent months. Provisions have mentioned cinemas and theaters in terms of entertainment but have not devoted due attention to these realities which risk [music venues] disappearing."

Earlier on Saturday, Italy announced it was tightening restrictions in five of the country's 20 regions in an effort curb the spread of the coronavirus.

There have been more than 2.9 million confirmed coronavirus cases and 97,500 deaths in Italy since the pandemic began. It is the second-highest death toll in Europe after Britain and the seventh-highest in the world.