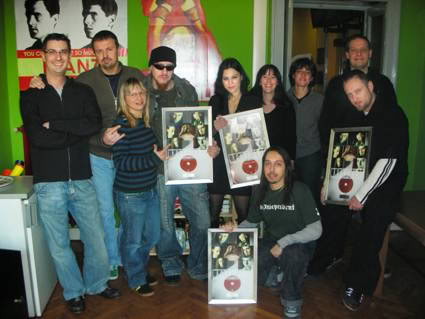 Century Media Records has announced that LACUNA COIL's "Karmacode" has been certified silver in the band's home country, Italy.

Commented vocalist Cristina Scabbia: "It's so amazing to get a recognition like this in our own country. It's amazing to know that this is not a fake prize to get more promotion impressing the media but something that we REALLY deserved for the sold copies of the album 'Karmacode'. We worked so hard and with so much passion for this during these years that people got our message strong and clear. The fans are our family and this silver record is for them, most of all, for the support they gave us during the years. Thank you so much."

A photo of LACUNA COIL and members of the Century Media staff with the silver-album plaques can be viewed at this location.

After completing work on their next video for the song "Within Me" in early March, the band will embark on the latest instalment of the Jägermeister Music Tour alongside STONE SOUR and SHADOWS FALL. The trek, which kicks off on March 23 and runs through early May, is the group's fourth U.S. run in support of the "Karmacode" album. This summer LACUNA COIL will make select festival appearances in Europe.