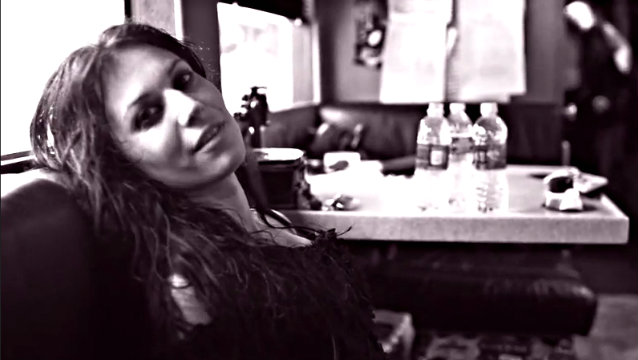 LACUNA COIL: 'Nothing Stands In Our Way' Video Released

"Nothing Stands In Our Way", the new video from Italian heavy rockers LACUNA COIL, can be seen below. The song is taken from the band's latest studio album, "Broken Crown Halo", which sold around 13,000 copies in the United States in its first week of release to debut at position No. 27 on The Billboard 200 chart. The CD arrived in stores on April 1 via Century Media.

LACUNA COIL continues its world tour in support of "Broken Crown Halo" with a run of dates in the U.S. and Canada in September. DEVIL YOU KNOW will provide support at all shows and STARSET will appear September 23 - October 12 except on October 7-8, when UNLOCKING THE TRUTH will join for those two nights. Up-and-coming Canadian band INCURA has been added to all Canadian shows. The tour will kick off in Sacramento at this year's Aftershock festival.

Asked in a recent interview with Loudwire what the "Broken Crown Halo" title means to him personally, singer Andrea Ferro said: "We were looking for a title that could represent a kingdom and crown, something to separate real and fake. Some things that you try to perfect and make perfect usually aren't as perfect as it seems.

"The main concept was to portray the reality of today, which is very shallow and fake. We don't want to live in a fabricated illusion; we want to accept existence even if it's sometimes in darkness. It's not always easy, but we're going to keep going and following our dreams no matter what."

Ferro also spoke about how he has evolved as a singer from the band's early days to what can be heard on "Broken Crown Halo". "Not only did I grow as a single singer, but also to work together [with Cristina Scabbia] and have a balance, it's something you learn every record and every tour," he said. "You understand more, you know yourself better. We're more natural singers, and we like to learn about our body, about our voice.

"It's really important to understand how the voice moves and works. You try to be as expressive as possible and adaptable to different kinds of songs. It's cool to learn and it's such an inspiration to be able to sing with such a talented singer as Cristina, because it's always challenging to be her counterpart. It helps me to improve and motivates me a lot to learn more every time and in every record."

LACUNA COIL is currently touring as a quintet following the departures of guitarist Cris "Pizza" Migliore and drummer Cristiano "Criz" Mozzati. Marco "Maus" Biazzi is handling all guitar duties for the band while drummer Ryan Blake Folden is sitting behind the kit.