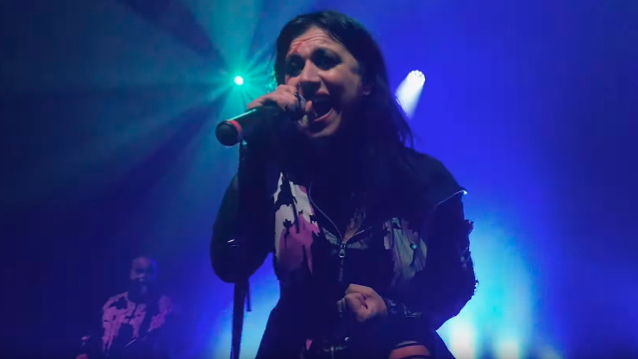 LACUNA COIL Releases Music Video For 'Save Me'

Italian metallers LACUNA COIL have released an official music video for the single "Save Me". Recorded on their last European tour, the clip — directed by Isabella D'Alessandro — shows powerful moments on stage and some intimate insights behind it.

LACUNA COIL vocalist Andrea Ferro said: "'Save Me' is about the fact that we all make mistakes, have struggles, and even regret things. But we are not those mistakes and struggles. We have the power to shape our day. The time is now."

"Save Me" is taken from LACUNA COIL's latest album, "Black Anima", which came out last October.

In a recent interview with Genre Is Dead! magazine, LACUNA COIL singer Cristina Scabbia said that it wasn't the band's intention to make a concept album when it started working on "Black Anima". "In the beginning, we had a lot of ideas but they weren't focused on one big picture, so that was a problem," she explained. "When you have too many things to say then the risk becomes saying something that is confusing. At first, we struggled to start the songwriting process. Marco [Coti Zelati], our bass player, who produced the record and is also the main songwriter for the music, couldn't really put down the music. He was worried because he wasn't inspired, and this is a thing you can only do when you're inspired. We had a meeting where we brought a lot of pictures and anything that could visually inspire. Marco gets inspiration from movies and video games because he wants to write a soundtrack for the images he sees. The inspiration started to flow very easily when we were finally focused on what we wanted to say. Then Andrea [Ferro, LACUNA COIL co-vocalist] and I wrote the vocal lines and lyrics. Marco would then put music on it and send it back to us. But all the songs are not tied to each other; it's not a concept record. It's definitely a story and we'd suggest listening to the record from the beginning to the end. Take an hour out of your day to enjoy it as it is. It is very dynamic and every song makes sense within the record. It brings you through a lot of different moods."

Ferro spoke about the "Black Anima" lyrics in more detail during an interview with Dead Rhetoric. He said: "In general, when we started [coming up with lyrical ideas], Cristina and I, we were brainstorming and trying to find out what would be the strongest thing to talk about. We usually start with personal experiences, at least as a starting point for the songs. We talk about what happens to us in the lyrics. So we were searching for the strongest impact of the last three years [since 'Delirium']. The strongest thing that happened was the fact that we had been losing some dear people and the way that we have been reacting has been very surprising. It's nothing that we have ever imagined before. This passage of life, which is natural for everyone to face sooner or later, it was one of the strongest impacts we had. Especially how much we still feel these people around us and inside us in everything that we do. So that led us to talk about a topic of using this connection between our world and [another] world. I was also reading a book called 'The Physics Of Angels', which is written by a priest and a scientist. They both analyze the physics of angels, ghosts, and spirits throughout history. That together lead us to this concept of black souls, which you can see on the cover. It tells all of the stories of the spirits. We also have Tarot cards decks, which we use to communicate with the spirits. We also imagined the stage clothes would be something like 'soul hunters' or something like that. All of a sudden, we opened up something much bigger to work with Marco on the music. So it's been a work that came altogether with the lyrics, then moved on to the music, as well as everything like the live clothes and scenery, and the merch. Everything was connected. It's not a proper concept album in that it is one unique story, but the approach and theme is common."