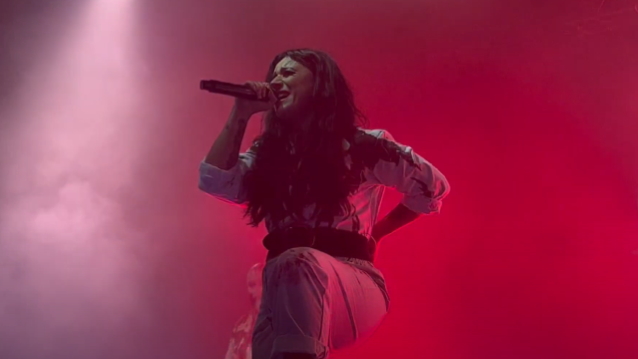 In a new interview with Heavy, singer Cristina Scabbia of Italian heavy rockers LACUNA COIL spoke about the band's plans for the follow-up to 2019's "Black Anima" album. She said: "We arrive home just in time to celebrate Christmas with our families and friends. I think that from January we will focus on new material. We already have some things, but not full songs. So we're gonna meet up and start working on new songs."

Last month, while promoting "Comalies XX", the recently released "deconstructed" and "transported" version of the band's third album, "Comalies", LACUNA COIL's Andrea Ferro told MetalSucks about possible new material from him and his bandmates: "We've been working on it a little bit, and we plan to go after it fully in early 2023. We have some very early versions and rough concepts of these songs that we're working on. We've looked at some ideas for album art and are kicking around titles, but it's still early, and nothing is final yet. And we've just had a meeting with the label recently, and we talked about it, but it's too early for us to put a release on it yet. We don't want to rush anything and want it to be a quality album. I can say that we plan to have tighter arrangements and that we don't want to make it overly long. So, in early 2023, we'll meet up, listen to everything we've collected, and see where we are. We'll work hard on the material and flesh it out to fully realized songs. But no hard release date, but maybe by the end of 2023, we'll see a new album from LACUNA COIL. It depends on how these sessions go; we'll see."

Three months ago, Scabbia told KNAC.COM that she and her LACUNA COIL bandmates "wrote a few songs" during the pandemic. "We have, like five [or] six songs that we're working on, but it was not time yet to release a full record," she said. "Also because we really base our inspiration on life, on experiences, and, to be honest, we didn't want to write a record about the pandemic. We wanted to go out again, meet people, live experiences, live life and get ready to bring everything in our music again. So we collected a ton of material."