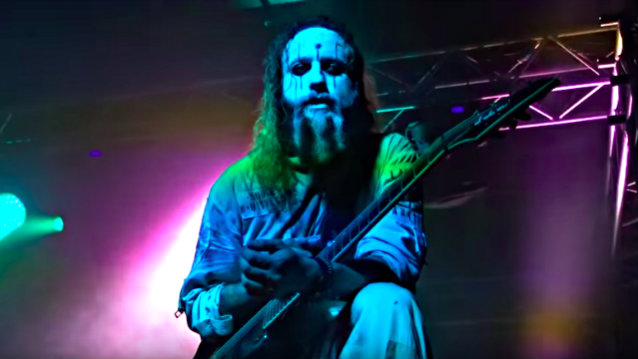 "He just started with us on the recording and touring for [LACUNA COIL's latest album] 'Delirium'," Andrea said (hear audio below). "So his first show was, actually… Before that, he only did some shows in Europe, some festivals, with his previous band. And in the first show with us, it was in Manila, in the Philippines, we were headlining a festival in a stadium with, like, twenty-five thousand people, so it was pretty shocking for him to go from a little local show to that. But, actually, he made less mistakes than we did that night, so it was a pretty good start for him. He's doing really well. He's a good friend."

"We had offers from people that can really shred like crazy, but I don't think it's needed for a band like us," he said. "We need somebody that can play what we need to play, but need also to be a normal guy — a person that is enjoying it and he wants to be with us and we can hang out even beside the band. So it's cool that we found somebody from our hometown. Even if he has to learn some stuff, it's cool to have somebody that is just one of us. He's good. He can play. But, obviously, it's good to have somebody enthusiastic to be there — not just somebody that you pay and he's there because you paid him, even if he's an amazing guitar player."

LACUNA COIL's first-ever book, titled "Nothing Stands In Our Way", is scheduled to be published around the world in early 2018. The book is described in a press release as "the full twenty-year story of the Italian gothfathers as told by the band in their own words. Illustrated throughout with rare and candid photographs, memorabilia and personal artefacts, it will see founding members Ferro, Cristina Scabbia and Marco Coti Zelati sifting through the birth, growth and full flowering of the band to tell twenty years of LACUNA COIL.