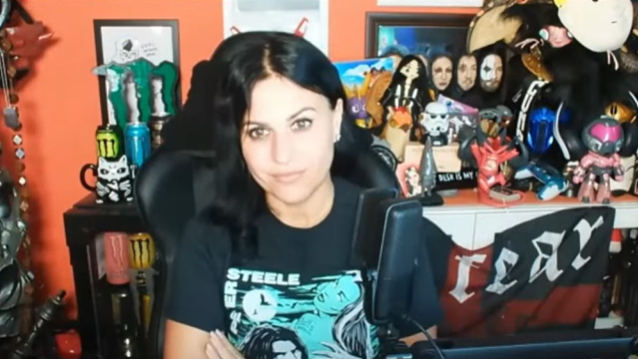 LACUNA COIL's CRISTINA SCABBIA Blasts Online Trolls: 'There Is No Space For Negativity And Hate In Our Family'

In a recent interview with Powerful Reactions, LACUNA COIL singer Cristina Scabbia discussed how she feels about online trolls. She said (as transcribed by BLABBERMOUTH.NET): "A lot of people say that if you have haters, it means that you made it. And we don't really have haters. Yes, we have haters, we have some people commenting, but I never put together haters [with] success, because people can hate on you for free without even caring about you. And the fact that we don't have real negativity in our community makes me really, really proud, because it shows that you can convince people with your work and with your attitude that you don't need to be a dick just because you have been able to have more opportunities than others, only because you're privileged and you're lucky to be doing, as a job, what you love. So, honestly, there is no space for negativity and hate in our family."

She added: "It is true that most haters usually love whoever they are criticizing, because there would be no point. I mean, if you don't care about something or if you don't like it, you do other stuff. You don't even waste the time to comment on something that you don't like."

Scabbia previously talked about the pitfalls of social media in a 2019 interview with Loud TV. At the time she said: "Sometimes I think that the new generation is kind of fucked, especially with social media. They've lost control. They sometimes have no idea how real life is. They're always ready to judge everyone else. Everyone has an opinion even if they have no idea what they are talking about. Everybody is a judge and everybody is ready to jump on the train of haters. This is kind of fucked up.

"A lot of people are saying, 'Don't feed the trolls.' I have the opposite attitude," she explained. "If someone comes to my pages or to a LACUNA COIL page, just like there to throw shit to us, I react. I'm not the person that is, like, 'Okay, I'll block you.' I will answer you. I don't mind if other fans will jump on board and will kick your ass. You did something that wasn't right, so you have to understand that what you did was wrong. And if I block you and I delete your message, it's like I'm not paying attention to you. But what I want to do is 'I paid attention to you. You're an idiot. You have to realize that whatever you do brings a consequence.' So, if the consequence is me answering and giving you two minutes of attention, it's not too bad if other people tell you're an asshole and will maybe make you think twice about what you did."

"Comalies XX", a "deconstructed" and "transported" version of LACUNA COIL's third album, "Comalies", was made available on October 14 via Century Media Records.