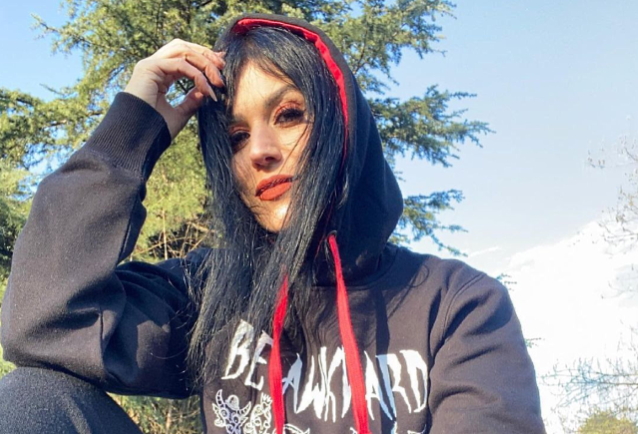 LACUNA COIL's Cristina Scabbia was recently interviewed on "Speak N' Destroy", a podcast about all things METALLICA, hosted by longtime journalist and METALLICA fan Ryan J. Downey. In the episode, she talks about the impact METALLICA's "black" album and the band on her career; the formation of LACUNA COIL; the story behind the band's signing to Century Media; the relationship between bands like PARADISE LOST, TYPE O NEGATIVE, LACUNA COIL and METALLICA, whose sound and image evolves over the years, with their fans; and more.

Speaking about the first time she heard METALLICA's music, Cristina said (as transcribed by BLABBERMOUTH.NET): "I can genuinely say that METALLICA was the very first metal band that I've ever heard — ever. When I wasn't even remotely close to becoming a singer in a band or meeting the other members of LACUNA COIL from the first lineup. I remember that I was still living with my parents and I remember that I was meeting up with the same group of friends every day. And one day one of them just brought a cassette player, just like, 'Oh, you've gotta listen to this,' and just played some METALLICA for me. I was, like, 'What is this?'

"I grew up in a family with two brothers and a sister that listened to a lot of music, but not metal music," she continued. "The heaviest thing was a record from AC/DC, but the rest was all PINK FLOYD, BEATLES, GENESIS… I mean, I'm not complaining at all — it was great stuff. Electronic music from the '80s, some rap, hip-hop — [we listened to] everything but metal, surprisingly. I don't know why. So when I heard this music coming from this cassette, I was very impressed because it was something that I'd never heard before in my world. So I started asking questions. I was, like, 'What is this? What is that?'

"Of course, I mainly loved the mellower songs back then, because I was still kind of, like, attracted and tempted but still not quite ready — maybe," Cristina added. "And then I kept the name of this band in the back of my mind, that I was just, like, 'Hmmm. They might come back later.' So I, let's say, improved my knowledge in metal in, I think it was 1993. So I was not super young — it's something that I discovered later because I started to hang out in a metal pub in Milano that is not existing anymore called Midnight pub. And that's where, actually, I met the guys of LACUNA COIL, at least Andrea and Marco and the guys from the previous lineup. And they were playing metal music. So a whole universe opened up for me. And the same friend who actually made me listen to METALLICA brought me to this pub. So I had a chance to listen to stuff that was probably close to my taste as a transition. So I fell in love with TYPE OF NEGATIVE, with PARADISE LOST — bands that had melodies into it. And I gradually went into something heavier, falling in love with it and understanding more about this music that was sounding different from the music that I'd listened to."

LACUNA COIL released a new live album, "Live From The Apocalypse", on June 25 via Century Media. It was recorded during a special livestream event where the band performed its latest album, "Black Anima", in its entirety, in September 2020.

LACUNA COIL recently announced the release of its very own tabletop (or better yet, concert floor!) party game, Horns Up! The game itself takes place at a LACUNA COIL show, where each player must fight his or her way to be the first to reach the stage. Shipping is available worldwide until November 2021. Pre-order your copy here.