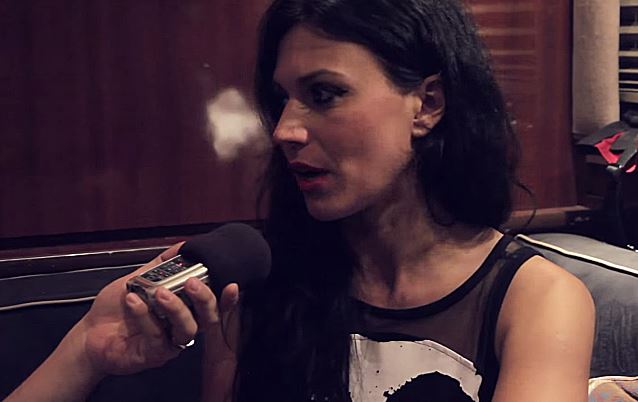 LACUNA COIL's CRISTINA SCABBIA: 'No Matter What You Do, You Will Be Criticized By Somebody'

Andrew Epstein of FlinkTO conducted an interview with vocalist Cristina Scabbia of Italian heavy rockers LACUNA COIL before the band's September 29, 2014 concert at The Opera House in Toronto, Ontario, Canada. You can now watch the chat below. A couple of excerpts follow (transcribed by BLABBERMOUTH.NET).

On criticism that she is "hyper-sexualizing" the metal genre with some of her publicity photos:

Cristina: "People always have this type of reaction because you're a woman in a male-dominated scene. Whether you like it or not, there are still more men listening and watching this genre. Now there are a lot more girls coming, there's more camaraderie with women, but still, guys will always look at women this way. And, honestly, I don't know why, as a woman, I should deprive myself from the sexy element. I mean, I like to be feminine, and feminine also means to be attractive and graceful and beautiful. So I would never put myself in manly clothes just because I have to convince somebody else, 'Oh, you don't have to look at me as a sexy object.' It's just, like, I don't care. If you want to look at the surface only, [it's] your bad. I wouldn't worry about that. But I'm open to criticisms. Once you get in the eye of the public, you have to be open to that, and know that, no matter what you do, you will be criticized by somebody."

On whether it is harder to be a woman in the heavy metal world who likes to be fashionable and wear a lot of makeup compared to someone like Doro Pesch, who has a more of a traditional metal "leather" image:

Cristina: "Not really, because even if Doro is wearing a lot of leather stuff, she's always very feminine; she's not dressed as a man. So she's still a woman in whatever she's wearing. I think that there's a lot of class in a lot of female performers that I see around, like beautiful dresses. It's something completely different that adds something to the genre. Honestly, I don't understand the defenders of heavy metal where females cannot enter, because it's, like… It doesn't make any sense. I mean, music is for everybody. Music doesn't have a sex."

LACUNA COIL's latest album, "Broken Crown Halo", sold around 13,000 copies in the United States in its first week of release to debut at position No. 27 on The Billboard 200 chart. The CD arrived in stores on April 1, 2014 via Century Media.