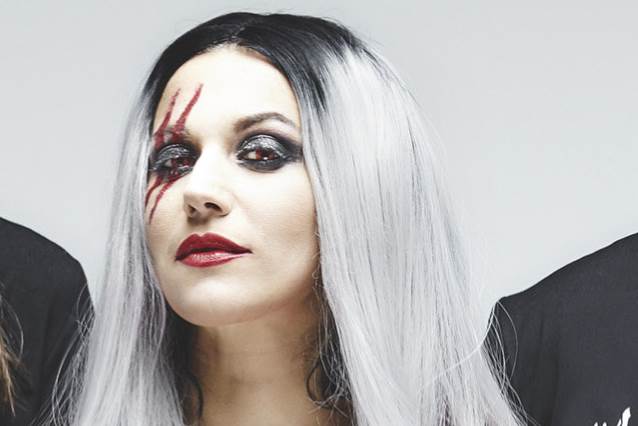 LACUNA COIL's CRISTINA SCABBIA On Being A Female In Male-Dominated Scene: 'I Have Always Looked At Myself As One Of The Guys'

Red Carpet News TV conducted an interview with LACUNA COIL singer Cristina Scabbia at this year's Metal Hammer Golden Gods Awards, which was held on June 11 at the Indigo2 in London, England. You can now watch the chat in three parts below.

Asked what it feels like to be considered an inspiration to newer metal bands, Cristina said: "It feels great, obviously. We got influenced by other bands, and now, new bands are influenced by the past. In our case, we are the past, but we are the present as well. And that makes us even more happy, because we know that there are a lot of bands that are taking inspiration from us, and we are still keeping on influencing them, which is great."

Scabbia went on to say that she doesn't focus on the fact that she is the only female musician in LACUNA COIL, explaining: "I always look at myself as a member of the band. I don't really like to separate myself — like, 'Oh, I'm a woman in the business.' I know that it was something very weird in the beginning, 'cause metal was just a male-dominated scene, but now it's more open and now things have changed. But I have always looked at myself as one of the guys as well."