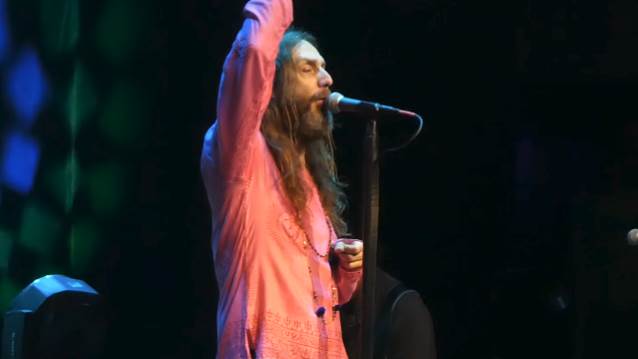 Ex-THE BLACK CROWES Singer CHRIS ROBINSON Says He Feels Bad For His Brother: 'Not A Lot Of People Are Interested In What He's Doing'

Former THE BLACK CROWES singer Chris Robinson says that his brother Rich Robinson is "always putting negative stuff out there" about him because the guitarist is frustrated about the fact that "not a lot of people are interested in what he's doing" outside of his previous band.

In a recent interview with Joe Rock of West Babylon, New York's WBAB radio station, Rich said that he "wouldn't really ever wanna wish to play in THE CROWES again. It's too toxic," he said.

"It is a shame that it became about money, which it did. Regardless of how Chris wanted to spin it, or whatever it was. Ultimately, he wanted everyone's money. He felt that he was more important and bigger and better than everyone else, and that's delusional and not the case, and I just felt like it wasn't very righteous to live that way. And so the band split up. And now, with getting a few years away from it, I'm pretty happy it did."

Asked by Joe Rock to respond to Rich's comments, Chrissaid: "What do you want me to say? At the end of the day, I have a band and a career outside of that, and it makes all those guys mad. I mean, they lie about… My brother has to do what he has to do. At the end of the day, it must be sad for my brother, because he's doing an interview about his band or whatever, and all people really wanna talk about is me and THE BLACK CROWES. So it must be frustrating for him, and I think that's what you hear. That's just old news to me."

He continued: "Trust me, the only thing that I think my brother has a grip on is money. I don't think he really knows what he's talking about in terms of why he thinks I'm not in the band. But he's gotta do what he's gotta do. And it must be difficult for him; I feel bad for him. But other than that, best of luck. Everyone's got music to play, and he's a musician, and he's gotta do what he's gotta do. And I do what I want to do. And, like I said, I think that's what it's about. It's only interesting because of the misery. People like to [say], 'Oh, my family sucks too,' or, 'Mine doesn't,' or whatever — that's the only reason that it's kind of interesting. But music is music."

Chris added: "My brother's always putting negative stuff out there. It must be tough for him. Not a lot of people are interested in what he's doing. But good luck to him."

Rich Robinson is currently involved with THE MAGPIE SALUTE in which he is joined by Marc Ford from THE BLACK CROWES, bassist Sven Pipien (also from the CROWES) along with lead singer John Hogg (HOOKAH BROWN, MOKE),drummer Joe Magistro and guitarist Nico Bereciartua.

THE MAGPIE SALUTE will release its debut album, "High Water I", on August 10. It is the follow-up to last year's "The Magpie Salute (Live)", which was largely recorded in front of a studio audience in Woodstock, New York.