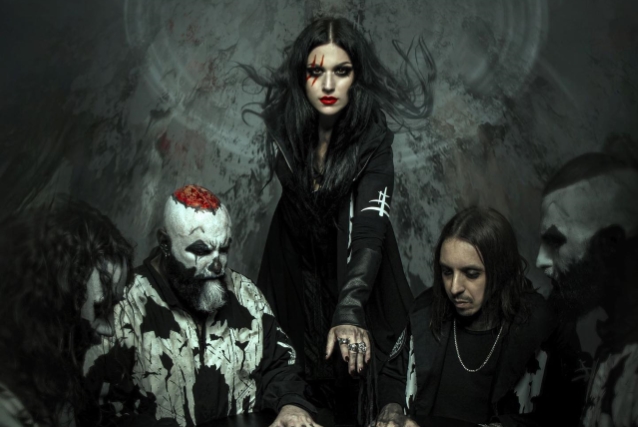 Prior to their July 20 performance at the Rock Fest in Cadott, Wisconsin, Italian metal veterans LACUNA COIL spoke to Lou Brutus of HardDrive Radio about the band's upcoming album, "Black Anima". The follow-up to 2016's "Delirium" will be released on October 11 worldwide through Century Media Records.

Said singer Cristina Scabbia: "We can't really talk too much about it yet, because we literally released the cover a couple of days ago, but we didn't release any songtitle or anything about the record.

"It might sound really cliché if we say that it's gonna be heavier and darker, but this is actually the truth," she continued. "Because I don't think that LACUNA COIL has ever been so heavy. And it will be surprising a lot of people, because we experimented a lot of things differently — vocally and musically.

Asked if the diversity of the new LACUNA COIL music wil lend itself to a dynamic stage show, Cristina said: "Absolutely, because we're touching different themes. And also the styles of the songs — despite being heavy and sometimes even melodic, they're very diverse, one from each other, so that will give us the opportunity to do a lot of different stuff on stage. We have a lot of ideas for the shows that we will play after the release."

LACUNA COIL will make a number of festival appearances in summer and will embark on an extended European tour in the fall with ELUVEITIE and INFECTED RAIN.