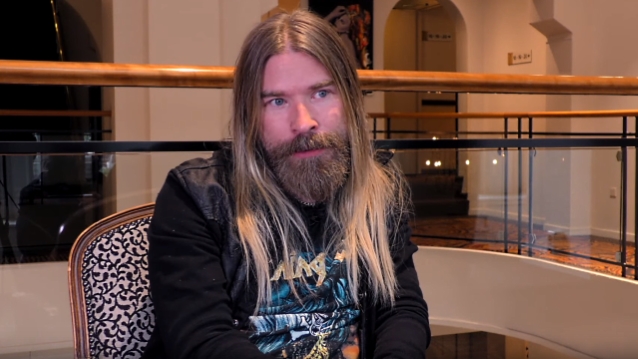 Holland's FaceCulture recently conducted an interview with bassist Pär Sundström of Swedish metallers SABATON. You can watch the entire chat below. A few excerpts follow (transcribed by BLABBERMOUTH.NET).

On whether the members of SABATON try to challenge each other with each new album release:

Pär: "We have an aim, of course, and that is to constantly create a better album is the always the aim of the band. It's a challenge in itself. We know when we have succeeded if we go on tour, and we play a lot of songs from the new album and we don't do it because we push it, we do it because we see that fans are requesting it. If fans are requesting that we do an album about only new stuff, or mainly new stuff, or a tour with the new stuff, then I know we have succeeded in this case. You know, coming up on our 20th anniversary of SABATON, there was people who said, 'You need to tour and play all the old stuff.' I was like, 'Why? We're making an album. If we have to tour with the old stuff, it means we can no longer write new stuff.' I didn't like that thought or idea, so 20 years of SABATON, I wanted us to look forward, not backward."

On the planning process for a new SABATON studio album:

Pär: "In one way, it starts a bit mechanical. Like, 'Okay, guys. We're going to release an album on this date. This means we need to be done by this date. This means we need to start on this date.' Okay, that's set. That means we have to have a number of songs ready by this date. There are a few deadlines. Those I set because I'm kind of the guy who would set boundaries and barriers and I am the one who controls the schedule and the plans for the band. So I set those. Then, it's usually me and Joakim [Brodén, vocals]. We sit down and we're like 'We need a topic for a new album.' There are tons of topics, obviously, especially since the world has been at war for quite some time. We don't really need to look far away to find some battles to sing about. Then we decided upon a topic. For this album, we did it last summer. Then we were like, 'Okay, we're going to do an album about World War I, and we're going to start the real songwriting maybe in September. In November, we're going to enter the studio.' So, three months of songwriting. It works if it's intense and uninterrupted."

On why SABATON chose World War I as the main theme for their new studio album, "The Great War":

Pär: "We have been singing about stories about World War I before. I liked this period of time. It's not that well known as World War II, and also, in my opinion, it's very dark and very brutal and very visually scary. This makes for good, interesting stories and topics. That was one of the things we always were intrigued by World War I. But, why now was because it was coming up for the 100 years anniversary of it. This was making all the sense. We didn't plan that. I mean, it was a coincidence, but quite weird and interesting coincidence that we came up to the century anniversary of World War I when we entered the studio in November. But, it was unintentional, because as I said earlier, I need to book the studio far in advance because we need to have an album out by then because of heading on tours, so it's all — not everything by SABATON has a plan, but most of the stuff has a long plan how it works out. Then, things have to fit inside of it. Then, we don't plan the songs. The songs have to come what they are. Then we have to add the different topics because music comes first."

On why SABATON prefers to use war and history-based themes as lyrical topics:

Pär: "There are a lot of different reasons why we are singing about battles and war. You can find all kind of emotions in there, you can find all kinds of emotions in heavy metal songs. So, for sure, it connects very well. Also, war is aggressive; heavy metal is aggressive. So you can fit it into there. Also, the stories go from anger to heroism, and this is easy to do in heavy metal as well. Why does it interest us? I mean, even before this, and still today, if I watch a movie and the movie has a title before where it says 'This movie is inspired by actual events.' I would know immediately that I'm going to enjoy this movie more than if it's completely fictional. We like to sing about something that is from the real world. Then if you think about it, there isn't going to be so many topics that fit with heavy metal. It goes quite naturally, and it fits with our interests. If I have to choose if I want to be a historian or a heavy metal guy, it's very simple — I'm a heavy metal guy. If I can be a heavy metal guy with a history interest, then I'm okay. [Laughs]"

On whether he think it's important SABATON provide the listener with songs about important moments in the history of mankind:

Pär: "For 15 years, we sang about history. There has been people who said 'You teach history. You helped me get through my exams.' I wouldn't say… we could have inspired some [people]. Sure, we can help people get through exams. I think it's difficult for anybody to say 'Only through SABATON I learned history.' That wasn't true until February this year when we launched SABATON History Channel. Now, we can properly teach people. Before this, we could just inspire. Now, we can properly teach people. With SABATON History Channel, we wanted to give people a little bit deeper knowledge of backgrounds to our songs, like why we chose to write it. We also wanted to tell some stories, some emotions from us in the band toward this. We became a little bit of a history institution. Did I aim for this? No. Was this something we really wanted to be? No. Do we feel that it's a good thing to be? Yes. Definitely. Do I see any negative things in teaching history? No. I see negative things in censoring history. I see negative things in altering history. I see negative things in the absence of history. But I can't see any negative things in teaching history. What potentially I can agree with if people say, 'Oh, this is no good.' The only ones we could agree with, is does it take a lot of time? Yes. Time we could have potentially written a new song, maybe. Is it worth it? Yes."

SABATON's ninth full-length album, "The Great War" was released on July 19 via Nuclear Blast Records. The band started recording the disc exactly 100 years after the end of the First World War (November 11, 1918) and took three months of intensive work to complete the album with longtime producer and collaborator Jonas Kjellgren at Black Lounge studios. The effort was mastered by Maor Appelbaum and the artwork was once again created by Peter Sallaí.