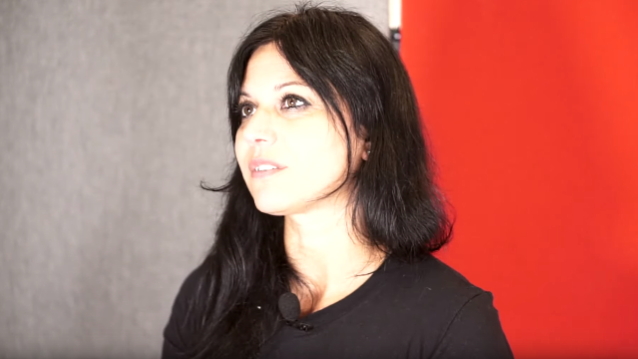 LACUNA COIL's CRISTINA SCABBIA Says Next Generation Is 'F**ked' Because Of Social Media: 'They Have No Idea How Real Life Is'

On whether their forthcoming "Black Anima" studio album is "angrier" than 2016's "Delirium":

Cristina: "Of course it's the next step, it's the next record. It is somehow, an evolution of the band from 'Delirium', but the record is completely detached from 'Delirium'. We were sure, though, that we wanted to keep the heaviness going because we just like to play live the heavier songs. They're more fun for us; they're entertaining for us to play. So we wanted to follow this direction on 'Black Anima', even though there are a lot of songs that are mellow or at least slower, but they still have that 'disturbing' vibe going on that I like very much, so that can be related to 'Delirium' somehow. We're not [angry] at all; we're actually very positive people. It's not anger. I don't think anybody's afraid anymore of screams and growls in metal because that's part of the package. There was no anger. It's more about a reflection on life and actually being focused on more important things and forgetting the small things and the bullshit that are sometimes we are too focused on. It was a more mature record, yet, very [reflective] and also disturbing at times. Some of the songs put you in a mood that you're, like, 'Why am I feeling like this? But I like it.' We wanted to stop the listener and just, like, sit down, reflect where you're at, how's your life, think about how you can get better, think about where you are right now. That makes me realize that I might be old because sometimes I think, too, myself that the new generation is kind of fucked, especially with social media. They've lost control. They sometimes have no idea how real life is. They're always ready to judge everyone else. Everyone has an opinion even if they have no idea what they are talking about. Everybody is a judge and everybody is ready to jump on the train of haters. This is kind of fucked up. A lot of people are saying, 'Don't feed the trolls.' I have the opposite attitude. If someone comes to my pages or to a LACUNA COIL page, just like there to throw shit to us, I react. I'm not the person that is, like, 'Okay, I'll block you.' I will answer you. I don't mind if other fans will jump on board and will kick your ass. You did something that wasn't right, so you have to understand that what you did was wrong. And if I block you and I delete your message, it's like I'm not paying attention to you. But what I want to do is 'I paid attention to you. You're an idiot. You have to realize that whatever you do brings a consequence.' So, if the consequence is me answering and giving you two minutes of attention, it's not too bad if other people tell you're an asshole and will maybe make you think twice about what you did."

On whether LACUNA COIL has to tour more due to the current state of the music industry:

Cristina: "We still like to keep a balance because we feel that for the longevity of the band, it's really important to keep a balance in between your music, which you love and your job, but also your personal life because I have known so many bands who gave up just because they were too tired of touring. I understand that you have to tour a lot because you want to touch every territory. But if you exhaust your batteries, there's no coming back. Once you're tired, once you're hating this job, it's, like, 'I don't want to do it anymore.' And there will not be a break to repair this. That's why at a certain part in our career, we said, 'We're touring too much. We're getting to the point where we're almost hating each other at the end of every tour because we're seeing each other's faces every day in a condition that is exactly not comfortable, far from home, far from our loved ones, far from our little commodities.' So, we said, 'Let's learn to be more selective. We don't need to do three tours in the same territory in one month. We would love to do it. But if the third time we don't go back with the same passion, that's not good. Let's take more time in between. Let's choose the gigs we're going to play. And we're going to do it with more passion and more energy.' That was exactly how it worked. In the beginning, I had doubts. I like touring, I like traveling. So, I was agreeing on touring and touring and I didn't realize that I was exhausting my batteries as well. But I was, like, 'No, we have to continue touring. It's cool because we have to touch this territory and we have to play here and there.' Then I realized we were getting tired of it. You can feel the tension. You can feel the 'I don't want to play tonight. Oh, we have to play another show.' I don't like this because if you're acting like this, you're dragging everybody down. That didn't happen since we took this conscious decision. It didn't happen. We're still playing a lot of shows as well. It's perfect."

"Black Anima" will be released on October 11 via Century Media.