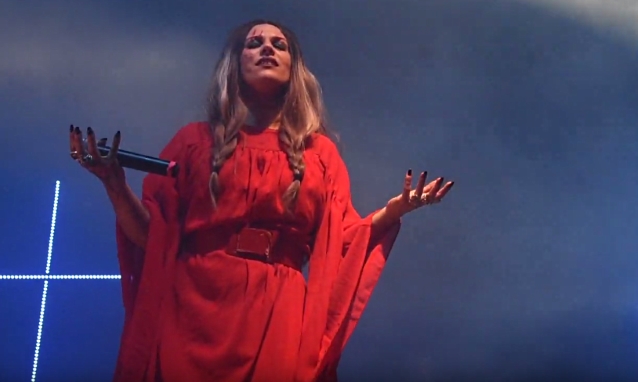 After a technical issue stopped LACUNA COIL's June 27 show in Bologna, Italy for a couple of minutes, frontwoman Cristina Scabbia used the time to perform an a cappella version of the AC/DC classic "Highway To Hell". Fan-filmed video footage of her rendition can be seen below (courtesy of BlogMusicaMetal).

LACUNA COIL recently entered the studio to begin recording its new album. The follow-up to 2016's "Delirium" is tentatively due before the end of the year via Century Media.

This past March, Scabbia said that LACUNA COIL's next album would be "heavy and dark." Her comments echoed those she made two years earlier when she said that LACUNA COIL's next disc could see the band pursuing a more aggressive musical direction, just as was the case with "Delirium". "I believe that it could definitely be even way heavier, because that's what we like to perform on stage," she told Metal Wani. "Of course, we like the ballads and the mellow songs, but we like better to perform songs that are heavier. And we love that music."