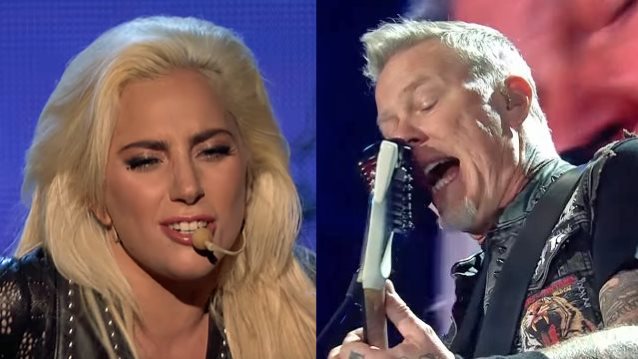 LADY GAGA On METALLICA: 'Those Guys Play Better Than They've Ever Played In Their Whole Lives'

Gaga told Apple Music's Zane Lowe that the idea for the pairing came about when she "was at [actor] Bradley's [Cooper] house with Lars [Ulrich, METALLICA drummer], and we were just, like, hanging out…" She went on to call Ulrich "amazing," before adding: "I've gotta tell you something: I went to see [METALLICA] live. I mean, I've seen them a couple of times live, but I saw them live recently, and we were watching the show and I'll tell you something, those guys play better than they've ever played in their whole lives."

It's not yet known which song METALLICA will play at the event, which will air live Sunday night from the Staples Center in Los Angeles at 8:00 p.m. ET on CBS.

The band had previously promised "something unique and special" for its Grammys performance.

The band is up for the Grammy Award for "Best Rock Song" for the track "Hardwired" from its new album, "Hardwired... To Self-Destruct".

Meanwhile, METALLICA returned to the stage on Tuesday night (February 7) with a concert in Copenhagen, Denmark that was initially supposed to be the third of a four-night stand at that city's Royal Arena. The first show was cut short on Friday night (February 3) when frontman James Hetfield took ill.

Hetfield was put on complete vocal rest the next day, forcing the band to postpone the second show on Sunday (February 5).

Following the Grammy Awards on Sunday, METALLICA will play an intimate show for around 3,000 or so fans at the Hollywood Palladium.