LAMB OF GOD and KREATOR have postponed their "State Of Unrest" European co-headlining tour to early 2023.

KREATOR and LAMB OF GOD's "State Of Unrest" European tour was originally scheduled to take place in 2020, but ended up getting postponed, first to 2021 and then to 2022, due to the ongoing coronavirus pandemic. Most recently, the trek was supposed to launch on November 18 in Copenhagen, Denmark and conclude on December 21 in Zurich, Switzerland.

LAMB OF GOD said in a statement: "Europe — we regrettably announce that due to unforeseen circumstances we have to postpone the 'State Of Unrest' tour with KREATOR to February / March 2023. Support for the new dates will be announced soon."

KREATOR commented: "Hordes, we deeply regret having to move the 'State Of Unrest' tour to February 2023, due to factors outside of KREATOR's control.

"To those 50,000 people who have held tickets since 2020, thank you for your continued support and excitement for these shows! Fortunately, you won't have to wait too long. We hope that your already amazing patience can hold out for another two months, we promise it will be worth the wait.

"To those who are unable to attend the new dates, refunds are available to you — please contact your point of purchase. See you soon!"

In a July 2022 interview with Sakis Fragos of Greece's Rock Hard magazine, KREATOR frontman Mille Petrozza revealed that his band and LAMB OF GOD have collaborated on a new original song, "State Of Unrest", to be released prior to the launch of the two groups' European tour of the same name.

"We did a song together — LAMB OF GOD and KREATOR," he said. "That's gonna be cool. And I think that's totally different because it's [a mixture of] the European [approach] and the U.S. [style]."

He added: "It's a song that we've written for the tour, to kick it off. I think that's gonna be a cool song. That's a cool collaboration that I did."

LAMB OF GOD's new album, "Omens", was released on October 7 via Epic Records. The band tracked the effort with longtime collaborator Josh Wilbur (KORN, MEGADETH) live in the room together at Henson Recording Studios (formerly A&M Studios) in Los Angeles, California, a location that birthed classics from THE DOORS, PINK FLOYD, RAMONES and SOUNDGARDEN, among others.

KREATOR's fifteenth studio album, "Hate Über Alles", was released in June. The follow-up to 2017's "Gods Of Violence" was recorded at Hansa Tonstudio in Berlin, Germany. Helming the sessions was Arthur Rizk, who has previously worked with CAVALERA CONSPIRACY, CODE ORANGE, POWER TRIP and SOULFLY, among others. 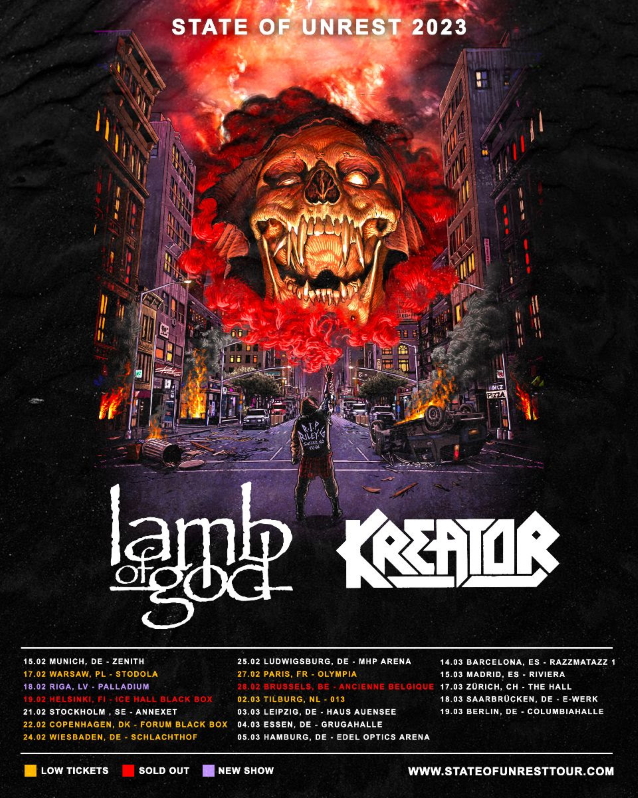