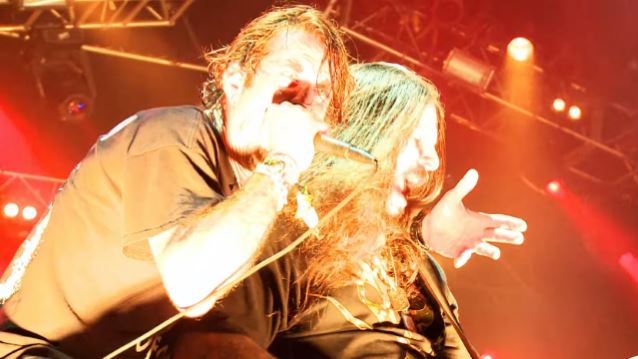 According to TMZ.com, a LAMB OF GOD fan has filed a lawsuit against Live Nation, the world's largest concert promoter, after sustaining an injury during the band's November 23, 2012 show at the Oakdale Theatre in Wallingford, Connecticut.

The fan claims he was trampled by the crowd in the standing-room section of the venue, causing fractures to the spine which required surgery. He is seeking more than $75,000.

According to the complaint, the fan "was standing in his aforementioned designated area [when] he was violently knocked to the ground and trampled, sustaining… severe [and] painful injuries… some of which are permanent."

The fan accuses Live Nation of "[failing] to provide adequate security for its event patrons and/or business invites; despite the fact that [Live Nation] knew or should have known that the patrons attending the LAMB OF GOD concert event were prone to altercations and/or creating conditions that posed a danger to the safely of other patrons; [and] despite the fact that prior violent and/ar injurious incidents had occurred at similar concerts and/or under similar circumstances."

The fan claims that Live Nation's "negligence and carelessness" resulted in the fan sustaining "multiple traumatic fractures of the cervical spine requiring surgical fusion; bruises and contusions about the head, neck, body and limbs; permanent impairment of the cervical spine; permanent disfiguring scarring of the neck; bi-lateral shoulder pain; upper back pain; and a severe shock to his nervous system, including a temporary inability to stand or walk after the event."

The members of LAMB OF GOD are not party to the lawsuit.