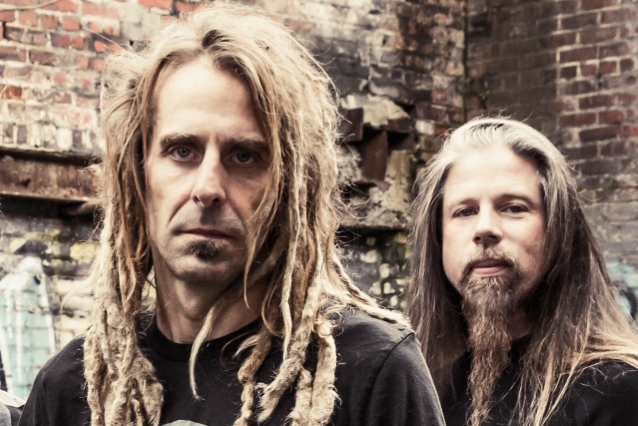 LAMB OF GOD singer Randy Blythe has declined to comment on drummer Chris Adler's status with the band.

Adler has not performed with LAMB OF GOD for the past year because he was undergoing physical and occupational therapy for injuries he sustained in a motorcycle accident in late 2017. He explained his absence in September with an Instagram post. "I had a motorcycle accident [in late 2017] that shattered my collarbone and right shoulder and also chipped bones in my hip," he wrote. "While surgery corrected the broken bones and I was able to play [in early 2018], I experienced some issues related to the injuries that needed to be addressed with a rigorous schedule of physical and occupational therapy which, is what I have been doing regularly since July [2018]."

Filling in for Adler in LAMB OF GOD has been Art Cruz, who has previously played with PRONG and WINDS OF PLAGUE, and recently accompanied guitarist Mark Morton on his first-ever solo tour.

Asked in a brand new interview with the WSOU radio station if fans can expect to see Adler playing with LAMB OF GOD again anytime soon, Blythe responded (hear audio below): "It's hard to say what's gonna happen with Chris Adler. I have no comment on him."

Blythe also refused to discuss the progress of the songwriting sessions for the follow-up to LAMB OF GOD's 2015 album "VII: Sturm Und Drang", saying: "I wouldn't believe anything you read on the Internet or believe any rumors… I don't ever talk about records until they're done. In fact, I will say this: the record doesn't exist. That's a fact. So, if the record doesn't exist, I'm not gonna talk about it. That would be like talking about plans you're gonna make with all this money you're gonna earn at your job to go on vacation. And it's bad luck."

This past March, Morton confirmed that LAMB OF GOD was in the process of writing material for its next album. "We've got a lot of new material put together, and we've got some more sessions to work on writing coming up," he said. "There's a ton of new — it's tough to call them songs yet, because they're not really completed — but there's a ton of new song ideas. Randy's already recorded some demo stuff. So I'd say we’re very deep into the writing process but not yet into the recording process."

LAMB OF GOD will spend most of June and early July making festival appearances in Europe. The band is also scheduled to play at the Aftershock festival in Sacramento, California and Exit 111 festival in Manchester, Tennessee in October.