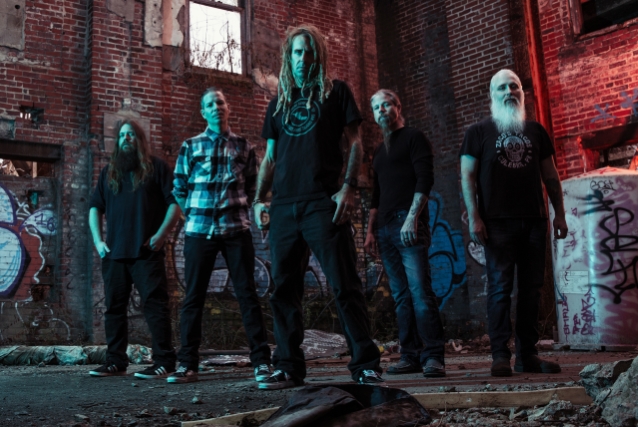 LAMB OF GOD Guitarist On Next Album: 'We're Really Putting A Lot Of Ourselves Into It'

LAMB OF GOD guitarist Mark Morton has confirmed to Graspop Metal Meeting that the band has commenced work on the material for the follow-up to 2015's "VII: Sturm Und Drang" album. "[There are] no specifics to announce — no [release] date or anything like that — but it is underway, for sure," he said (see video below).

Asked if LAMB OF GOD is feeling any pressure following up an album that is already four years old, Morton said: "I don't think any more than usual. The new material is always really important to us, and it is this time as well. So we're really putting a lot of ourselves into it and a lot of our personal experience and a lot of good energy going into it. But at this point, I don't think there's any pressure, except just to document where we are at this point in our career and feel good about it."

LAMB OF GOD is spending most of June and early July making festival appearances in Europe. The band is also scheduled to play at the Aftershock festival in Sacramento, California and Exit 111 festival in Manchester, Tennessee in October.

It is not presently clear if LAMB OF GOD's new album will feature drummer Chris Adler, who has not performed with the band for the past year because he has been undergoing physical and occupational therapy for injuries he sustained in a motorcycle accident in late 2017. Filling in for Adler in LAMB OF GOD is Art Cruz, who has previously played with PRONG and WINDS OF PLAGUE, and recently accompanied Morton on his first-ever solo tour.