LAMB OF GOD Guitarist: 'We Hope We'll Be Able To Get RANDY Out This Afternoon'

Guitarist Willie Adler of Richmond, Virginia metallers LAMB OF GOD has commented on the report that the band's lead singer, Randy Blythe, was arrested yesterday in Prague in the Czech Republic and charged in connection with the death of a fan two years ago.

Blythe, 41, is reportedly accused of causing the fatal injury that occurred at LAMB OF GOD's May 24, 2010 show at another venue in Prague. The singer apparently either pushed or struck the fan who had come on stage, and that person later died.

Commented Willie: "It's been a rough couple of days. All I can say is that I can't recall that particular show let alone a fan being beaten on the stage. I think I would've noticed something like that considering the Dime [the 2004 murder of PANTERA/DAMAGEPLAN guitarist 'Dimebag' Darrell Abbott] thing."

He added, "We're all still here in the Czech Republic awaiting what is to happen. We hope we'll be able to get Randy out this afternoon. All our thoughts are with him as well as the family of the deceased fan. We've no real clue as to what happened to him, but we send our condolences. All we try to do is entertain; the fans are why we're here. We would never try and harm anyone."

LAMB OF GOD's publicist, Adrenaline PR, issued a statement earlier today stressing that "under no circumstances was there a fight of any kind involved [during LAMB OF GOD's 2010 concert]. This incident deals with a fan that three times during the concert jumped the barricade and rushed Randy during the performance. It is alleged that the third time, security was not able to reach him and that Randy pushed him back into the audience where supposedly he fell and hit his head."

A Czech LAMB OF GOD fan who says that he attended the band's 2010 concert in Prague, described the incident on Facebook as follows: "I've seen many bands in that club like DEVILDRIVER, HATEBREED, etc. and every metal fan in Prague knows that this is one of the 'stage-diving-friendly' clubs. HATEBREED and DEVILDRIVER were OK with that. The guy climbed on stage and Randy slapped him and the guy fell on the ground (NOT off the stage),[Randy] sang few words to his face and pushed him back and said that he is not OK with people on the stage. A murder? I dont think so...that hit wouldn't kill you unless you're made of glass."

Randy's brother, Mark Blythe, told CBS-6 that he's awaiting further details and said the charge is "bogus and outrageous and will be dropped immediately." 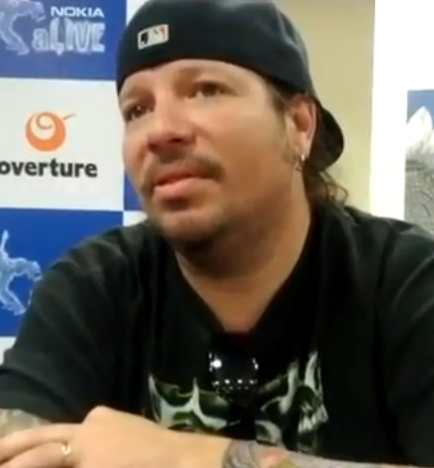