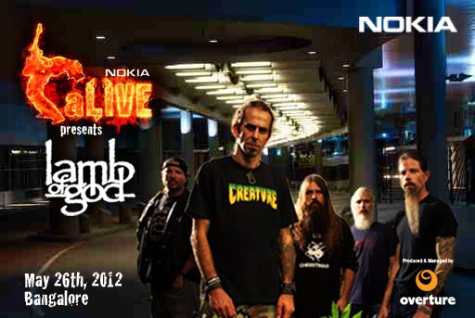 On May 25, Headbangers India conducted an interview with Chris Adler (drums) and Willie Adler (guitar) of Richmond, Virginia metallers LAMB OF GOD following their press conference in Bangalore, India ahead of the band's concert the next day at the city's Clarks Exotica. You can now watch the chat below.

LAMB OF GOD recently released the first trailer for their projected 2013 feature film, "As The Palaces Burn". The film, directed by award-winning documentary filmmaker Don Argott and produced by 9.14 Pictures ("Last Days Here", "Art Of The Steal", "Rock School"),examines the impact that music and particularly heavy metal music has made on people around the globe as they live in a 21st century world full of economic uncertainty, political unrest, social injustice, and under a constant fear of war and violence. Filming has taken place to date in Colombia, Venezuela, Mexico, India, and Israel. Filming in the United States will take place over the summer months. Embedded in the trailer is the video for the band's second single from the "Resolution" CD, "Desolation". The clip was shot at shows in South America and Mexico and is the follow-up to the animated video for the track "Ghost Walking".

LAMB OF GOD, currently on tour in Europe, begins the North American tour for "Resolution" on August 1 in Seattle, Washinigton along with co-headliners DETHKLOK and special guest GOJIRA.

Hal Leonard has released the official, note-for-note matching guitar tab book for "Resolution", the latest album from LAMB OF GOD. It is now available for purchase from MusicDispatch.com.

"Resolution" sold around 52,000 copies in the United States in its first week of release to land at position No. 3 on The Billboard 200 chart. The band's previous CD, "Wrath", opened with around 68,000 units back in March 2009 to enter the chart at No. 2. This figure was roughly in line with the first-week tally registered by 2006's "Sacrament", which shifted around 63,000 units to debut at No. 8. It also represented almost double the amount of records sold by its predecessor, "Ashes Of The Wake", which premiered with 35,000 copies in September 2004.

"Resolution" was released in the U.S. via Epic and internationally through Roadrunner Records. The CD was recorded at various studios in Virginia and New York with producer Josh Wilbur, who worked on the band's last effort, 2009's "Wrath".