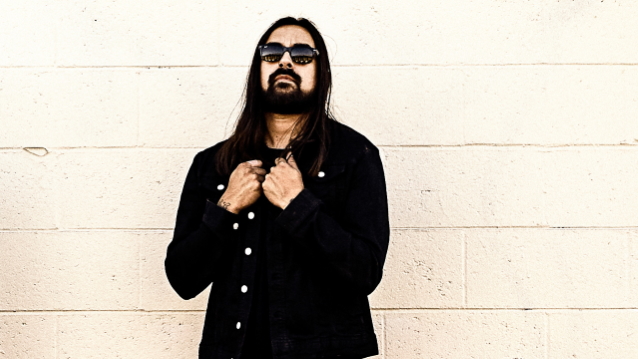 LAMB OF GOD's ART CRUZ On Finding His Sound: 'I Don't Want To Be CHRIS ADLER; I Want To Be Me'

Asked in a new interview with Terry "Beez" Bezer of Knotfest.com's "Mosh Talks With Beez" how he manages to balance being influenced by Adler with putting his own stamp on the LOG sound, Cruz said (see video below): "It's how we're made as drummers. I watch Mike Portnoy [ex-DREAM THEATER] every day — he's a huge influence on me too — and I can see where his influences come from, but he's Mike Portnoy. So at the end of the day, you can be influenced forever, and we can always sound like somebody else, or try to sound like somebody else and emulate somebody else, but I'm never going to be Chris Adler, and I don't want to be Chris Adler; I want to be me. I wanna be Art Cruz, but I've been able to use what he's inspired me for and build who I am. So I'm very thankful that we worked it the way we did."

He continued: "I credit Josh Wilbur all the time, our producer. He comes from drum roots, so there was really something about having a person like that to help almost extract these things. 'Cause a lot of the times, you have to have an outside look to see deeper of what you're actually doing, so he was able to really, like, 'Yo, can you do this? Can you do this? How about try this?' He took me out of my comfort zone as well, but at the same time really just changed the game — totally changed the game — and helped me as a player. So I'm just thankful that he was able to do that.

"I always mess around now, just playing to some of the songs that we recorded already from the record, and I catch myself just going above and beyond even more," he added. "I was talking with Josh, and he was, like, 'I think as you're comfortable at this point — you've already got that record out of the way, and you know how to work with the guys — now you're just going in.'