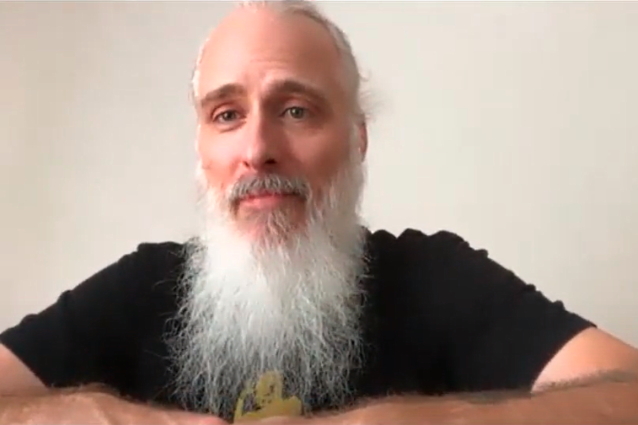 In a recent interview with Holland's FaceCulture, LAMB OF GOD bassist John Campbell was asked for his opinion on the state of America at the moment. He responded: "We're fucked. The national leadership is a murderous sociopath. And it's, I think, glaringly obvious, when you know that there's a deadly virus going around, yet you have rallies where you bring people together in a closed area.

"The reason that we [did] these online [LAMB OF GOD] performances [last month] is because it would be irresponsible to gather people like that. So we're trying to push forward as best we can, whereas the president of the fucking country is killing people; he's murdering people."

Asked if he thinks the upcoming presidential election will matter, Campbell said: "I don't know. I remember back when George Bush was elected a second time. That's when I realized that the bad guys sometimes win important things. And then I remember, shortly before Trump was elected, talking to my parents, and they were, like, 'There's no way he's getting elected. Don't worry.' And I was, like, 'Ehhh. I kind of remember this from before. He could win.' And he did.

"Regardless of the outcome of the election, leading up to it, I think it's just gonna get more and more chaotic; there's gonna be more violence stoked by the president. If he loses, he will [contest] the election and try and tie it up in court. He may try to incite his followers to violence to keep him in office somehow. I really have no idea what's gonna happen. It's crazy times we're living in, and people are very aggravated and divided."

Campbell's LAMB OF GOD bandmate Mark Morton has been an outspoken critic of America's 45th president. Back in July, the guitarist blasted Trump over his claim that the United States is only seeing a spike in new coronavirus infections because more testing is being carried out.

This past April, LAMB OF GOD frontman Randy Blythe told Consequence Of Sound that he didn't write the lyrics for band's recently released self-titled album specifically about Trump.

"My disdain for him is no secret," Blythe said. "Before he ever got elected, people would ask me in the press, 'What do you think about Trump being president?' And [I would say], 'The man's a fucking idiot, and he's a criminal.' All you have to do is research his real estate dealings in New York City; it's a matter of public fucking record. So it's not like I'm scared to say, 'Oh, fuck Trump,' or something. But I think he's just a symptom of a larger sociological problem."