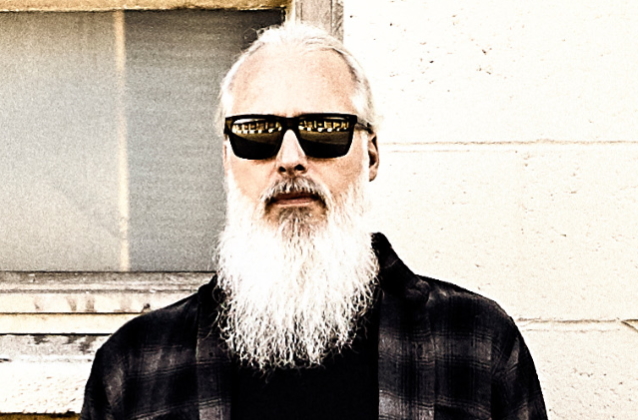 LAMB OF GOD's JOHN CAMPBELL On TRUMP Inpeachment Trial: 'This Is Our Chance To Address That The U.S. Was Founded On White Supremacy'

LAMB OF GOD bassist John Campbell has commented on the ongoing impeachment trial of Donald Trump, saying that holding America's 45th president accountable for inciting a violent insurrection is an opportunity to address the fact that the country was in part founded on white supremacy.

After another Twitter user apparently reacted to news reports that House Democrats began wrapping up their impeachment case against Trump on Saturday, writing, "We cannot speed past the reality that armed white supremacists broke into the Capitol to zero out the overwhelming vote of Black people across the country to get a white supremacist out of office", Campbell chimed in, writing: "This is our chance to address that the US was founded on white supremacy. I hope we don't squander the opportunity to correct course and truly live up to the ideals that all humans are created equal and deserve equal opportunity to life, liberty and the pursuit of happiness."

Last fall, Campbell described Trump as "a murderous sociopath" and accused the president of "killing people" by holding large rallies while "there's a deadly virus going around."

Asked by Holland's FaceCulture prior to the 2020 presidential election if he thought the election would matter, Campbell stated at the time: "I don't know. I remember back when George Bush was elected a second time. That's when I realized that the bad guys sometimes win important things. And then I remember, shortly before Trump was elected, talking to my parents, and they were, like, 'There's no way he's getting elected. Don't worry.' And I was, like, 'Ehhh. I kind of remember this from before. He could win.' And he did.

"Regardless of the outcome of the election, leading up to it, I think it's just gonna get more and more chaotic; there's gonna be more violence stoked by the president. If he loses, he will [contest] the election and try and tie it up in court. He may try to incite his followers to violence to keep him in office somehow. I really have no idea what's gonna happen. It's crazy times we're living in, and people are very aggravated and divided."

Like Campbell, LAMB OF GOD guitarist Mark Morton and vocalist Randy Blythe have been outspoken critics of America's 45th president. Back in July, Morton blasted Trump over his claim that the United States is only seeing a spike in new coronavirus infections because more testing is being carried out.

In April, Blythe told Consequence Of Sound that he didn't write the lyrics for band's self-titled album specifically about Trump.

"My disdain for him is no secret," Blythe said. "Before he ever got elected, people would ask me in the press, 'What do you think about Trump being president?' And [I would say], 'The man's a fucking idiot, and he's a criminal.' All you have to do is research his real estate dealings in New York City; it's a matter of public fucking record. So it's not like I'm scared to say, 'Oh, fuck Trump,' or something. But I think he's just a symptom of a larger sociological problem."

LAMB OF GOD's latest LP was released in June 2020 via Epic Records in the U.S. and Nuclear Blast Records in Europe.

This is our chance to address that the US was founded on white supremacy. I hope we don’t squander the opportunity to correct course and truly live up to the ideals that all humans are created equal and deserve equal opportunity to life, liberty and the pursuit of happiness. https://t.co/1MYxHvGg3n