Cruz and Coyle have both played with LAMB OF GOD in the past. Cruz filled in for LAMB OF GOD drummer Chris Adler on tour last year while Chris recovered from a motorcycle accident, and Coyle subbed for Morton when LAMB OF GOD opened for METALLICA in 2009.

Appearing with Morton on the trek will be co-headliners LIGHT THE TORCH and support act MOON TOOTH.

"Anesthetic" is due out March 1. The official lyric video for "Cross Off", featuring late LINKIN PARK singer Chester Bennington, can be seen below.

Joining forces with WPP Records and Spinefarm Records on a worldwide basis, Morton will release the 10-track album that sees him further explore his creative drive for writing and collaboration. The disc was made alongside a dream team of highly respected musicians from a multitude of musical worlds; some friends and some who would never be expected to collaborate with metal genre leaders LAMB OF GOD.

I’m thrilled to announce my band for my upcoming tour, in support of #Anesthetic: Mark Morales (@sonsoftexas) on lead vocals, @DocCoyle (@badwolves) on guitar, @Riggidyrat (Sons Of Texas) on bass and @theartcruz (Prong, @windsofplague) on the drums! pic.twitter.com/T6UBalR6SZ 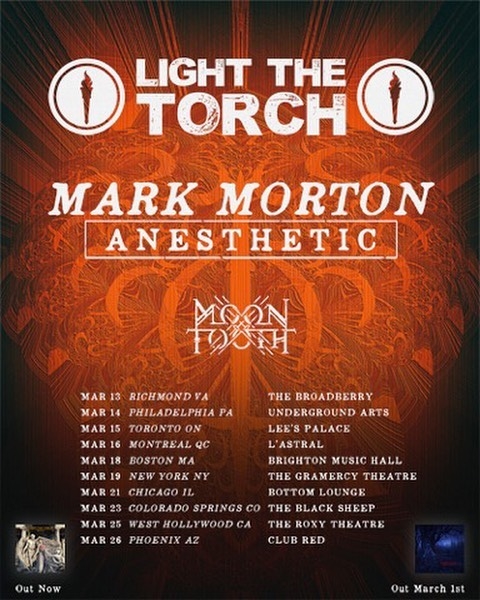