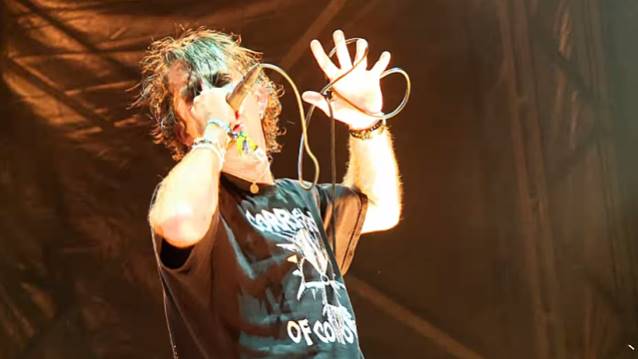 LAMB OF GOD frontman Randy Blythe has marked the second anniversary of his arrest on manslaughter charges in the Czech Republic by reflecting on the experience and thanking his wife, Cindy, for her support throughout the nearly year-long ordeal.

Blythe was arrested at the Prague airport on June 27, 2012 and was accused of shoving a local fan off the stage during LAMB OF GOD's May 2010 concert in the city. The man, who is said to have stormed the stage three times during the show, reportedly suffered a brain hemorrhage that resulted in his death nearly a month later. Blythe was eventually acquitted of all charges after a panel of Czech judges ruled that concert promoters — and not Blythe — were largely to blame for the fan's death.

Earlier today, Blythe posted the following message on his Instagram account along with a a photo of him and his wife:

"The woman beside me, my wife Cindy, texted me this morning telling me that 2 years ago today I was arrested in Prague. This made me a little emotional.

"A lot of things have happened in 24 months. For 14 of those months, I didn't know whether or not I would be going to prison for 5-10 years. In those 24 months, I have toured the U.S., Europe, Asia, Australia and New Zealand, finishing in Africa just 4 1/2 months ago. I've had dear friends die, get married, have children. I've spoken at funerals, at a the premiere of a movie about my band, I've gotten my own radio show where I've spoken to guys who've influenced me since high school. I've convinced friends to go to rehab, I've seen some stay sober and some not. Our 18-year-old cat Henry died, and we got our new cat, Salad. I've been pursued by a literary agent, convinced to write a memoir and got a book contract. I've written and recorded music that was performed by the Richmond Ballet and I've sang on a project with one of my punk rock heroes. I've written band bios, record reviews, memorial pieces for dead friends for magazines. I've had my photos used by bands, and gotten a solo gallery exhibit scheduled for spring 2015 in New York City I'm working on. I've written lyrics and most of my book. I've had good days and bad days.

"Two years ago today I was in jail, scared and wishing I was free and could go surfing. In a few moments, I will do just that.

"I'm in the best shape I've ever been in my life.

"I've stayed sober one day, sometimes, one minute at a time throughout all this, and this woman has stuck by me as I fumble through this thing we call life. So I love you, honey! Thanks for sticking with me.