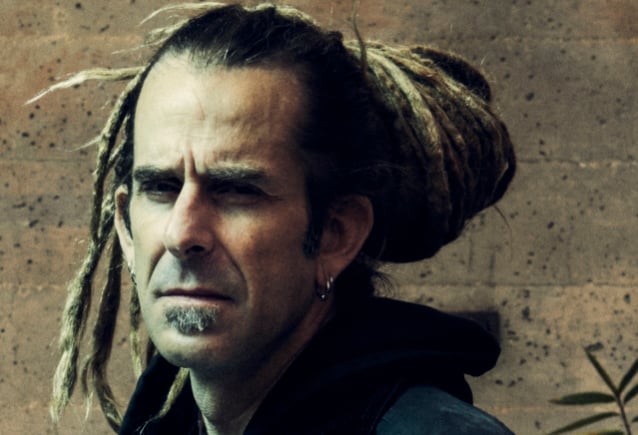 LAMB OF GOD singer Randy Blythe has revealed to Metal Hammer magazine that he is working on two new books. The first is said to be "a long-term project" called "Frontman", which, as its title suggests, focuses on other people who share his profession. The second is a sort-of sequel to his 2015 memoir, "Dark Days: A Memoir", which focused on his ordeal in a Czech Republic prison and his subsequent acquittal.

"The last book was about personal accountability," Randy explained. "The vehicle to that was the story about me getting arrested and going to trial. This book is about perspective — the core theme is perspective and changing it to a healthy one. In recent years, I've been listening to other people's perspectives rather than just trying to figure out everything myself, because I'm not going to. The book is a collection of stories about different experiences I've had with people and what I've taken away from those experiences."

Last month, Blythe told the Illinois Entertainer that he was working on a new "non-fiction book." He added: "I wanted to write fiction, but my agent said, 'You need another non-fiction book.' And he was pushing me toward what they call, I guess, an 'inspirational memoir' or whatever. So I'm writing this book, and it's about different perspectives from other people that I've tried to incorporate into my own life and take something from. Something positive from — things I have learned from people other than me. And it's been very difficult to maintain any sort of positivity for a while now. It really has."

This past May, Blythe was asked by Full Metal Jackie's nationally syndicated radio show how writing prose is different from writing lyrics. He responded: "Well, they're two different things — two very different things. I always say that writing a book makes writing an album look like going to kindergarten. It is a much more intense, much more sustained [and] much more nerve-racking extended creative effort. There's pros and cons to it, of course. And the thing that I dislike about it, just as a lazy bum, is I'm having to do it all by myself. If there's something bad in the book or it doesn't work, then I can't blame it on my bandmates. 'Cause we're a democracy — we really are a democracy — and if someone is unhappy with something, then we won't move forward with it creatively, if they're really emphatic about that. That being said, we make a lot of compromises with each other in order to work as a band. So, if there's something that I don't particularly like in one of our songs or on an album or a song that I'm not particularly feeling great about but the rest of [the guys] love the song, then I'm, like, 'Oh well. So be it.' It's part of the business of being in a band. And then if it comes out and I still don't like it, I can be, like, 'Well it was their decision, not mine.' When you write a book, if you screw up something or something's not good or something later you review and it doesn't pass muster, that's on you. So it's a bit more nerve-racking. No, conversely, that's kind of the same thing I like about it, because I don't have to bounce my ideas off of anyone else. I say exactly what I want to say without having to go through any sort of filtration process with anyone else — it's just me. So, in a way, it's a much more creative process — or a purely creative process, I would say — because it's just you and the blank page. But it is nerve-racking — it really is. And also, as I get older, I just enjoy quiet more and more and more, and writing is a very quiet and solitary activity — at least it is for me. So I enjoy that. My ears don't ring after writing a book, but they sure as hell do after writing an album."

In July 2021, Blythe said in an Instagram post that he was about to begin writing his second book. The now-51-year-old singer wrote: "It's been six years since my 1st book, Dark Days, came out. I've been kinda busy but I can't screw around any longer- it's finally time to write a new one. The proposal is done, the publishers accepted it, & the contract is hammered out & in the mail.

"Shit- that means I actually have to write this thing! All I'll say is: A) it's another non-fiction book, & B) I just spent over two weeks utterly consumed by writing the freaking introduction. 2,296 words in 15 days- that not a lot, but I want it to be RIGHT. Plus, I'm just stretching the old muscles, getting back in shape for the brutal long haul that lies ahead. The sustained creative heavy lifting required to write a book makes writing the lyrics for an album look like preschool finger painting. Plus, if what you're doing is turning out shitty, you can't just blame the rest of your band. (sorry dudes)

"Most books on writing of are bullshit, collections of pointless 'exercises' from people who haven't sold any other books of their own (I should know, I've bought most of them.) No book on earth is gonna turn you into a good writer. There is no magic pill. Just like playing music, shooting photos, or pursuing any other creative endeavor- the ONLY way to find out if you're any good is to DO IT. You gotta write, & the hardest part of writing is sitting your ass down to do it, & then repeating that process day after day after day."

In 2012, Blythe was arrested in the Czech Republic and charged with manslaughter for allegedly pushing a 19-year-old fan offstage at a show two year prior and causing injuries that led to the fan's death. Blythe spent 37 days in a Prague prison before ultimately being found not guilty in 2013.

Blythe's prison experience inspired two songs on LAMB OF GOD's 2015 album "VII: Sturm Und Drang": "512", one of his three prison cell numbers, and "Still Echoes", written while he was in Pankrac Prison, a dilapidated facility built in the 1880s that had been used for executions by the Nazis during World War II. It also led him to write the aforementioned "Dark Days", in which he shared his whole side of the story publicly for the first time.