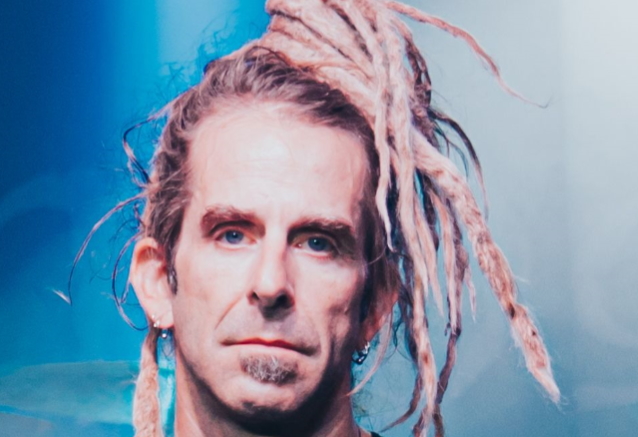 LAMB OF GOD's RANDY BLYTHE On Touring During Pandemic: 'We're Just Trying To Survive This Thing'

LAMB OF GOD frontman Randy Blythe spoke to Meltdown of Detroit's WRIF radio station about what it's been like to return to the road as part of "The Metal Tour Of The Year" with MEGADETH, TRIVIUM and HATEBREED. "It's awesome," he said (as transcribed by BLABBERMOUTH.NET). "It's been since February 14th, 2020 since we played a show, and that was the only show we played in 2020, and we hadn't toured in two years. It's awesome. It's an interesting time."

According to Blythe, not being able to play live in 2020 was a "weird" experience. "Because we put out a record that came out last summer — a little over a year ago; I believe it came out in June 2020," he said. "And we tour so much, so that immediately it wasn't, like, 'Oh my God. I've gotta go back on stage.' I've been doing it for 27 years or whatever with this band alone. But it was weird in that we put a record out and we couldn't go tour to support it and play new songs, and that just felt like a huge component of my life was removed. That's the way I've lived my entire adult life — you write, record, put out a record and then you go out and play songs on it. So it was very strange."

That said, "I can't complain, because a lot of people lost businesses, lost jobs, people died and all that stuff," Randy clarified. "I'm not gonna whine about not being able to play a rock and roll show when other people faced far more serious consequences."

Randy also talked about how he and his bandmates are coping with the complexities and expense of doing live shows — including navigating a patchwork of safety protocols that vary by city and venue — amid concerns about resurgent COVID-19 cases.

"Dude, we're just trying to survive this thing," he said. "This is a crazy time. We're trying to stay healthy, stay in the bubble and get through this tour… It is strange not to hang out with the other bands — we aren't hanging out with other bands on their buses or in their dressing rooms. We're out here with HATEBREED, who, they're family to us; their singer, Jamey [Jasta], is one of my best friends. And we talk via text on tour. And we talk via text at home all the time. But it's weird. His bus is right over beside mine, and we don't hardly see each other. So there's a bit of that — the normal camaraderie that you feel on a tour and the shenanigans you get into and just hanging out and playing pranks on each other, all that other crap, that's absent. But we're all out here trying to adapt and overcome and do what we have to during this weird, weird time to give people a rock show."

LAMB OF GOD is touring in support of its latest, self-titled album, whcih was released via Epic Records in the U.S. and Nuclear Blast Records in Europe. The follow-up to "VII: Sturm Und Drang" marked LAMB OF GOD's first recordings with Art Cruz, who joined the band in July 2019 as the replacement for the group's founding drummer, Chris Adler.