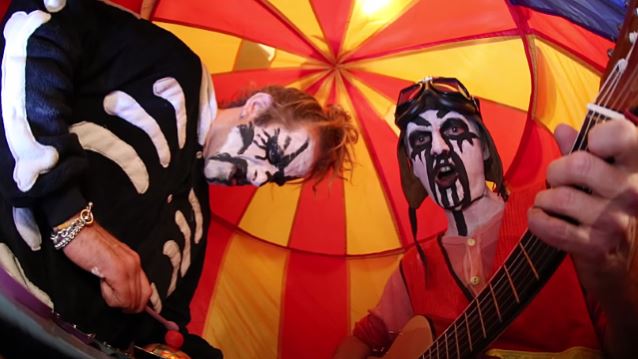 A video clip of LAMB OF GOD frontman Randy Blythe and Sam Haycroft (SYDONIA, I AM DUCKEYE) performing a a special take on an old children's song, "Twinkle Twinkle A Needle In Your Eye", can be seen below. The clip was filmed last month somewhere in Australia while LAMB OF GOD was in the country performing at the Soundwave festival.

Da Capo Press has set a July 14 release date for Blythe's memoir, "Dark Days: My Tribulation And Trials",. Random House purchased the foreign rights to the book and will act as publisher in the U.K., Australia, New Zealand, and South Africa.

The memoir, which puts emphasis on the past year of Randy's life, is an incredible, harrowing, heartbreaking, and redemptive story told in Blythe's already well-recognized writing style.

Book synopsis: "In 2010, a nineteen-year-old super-fan rushed the stage during a LAMB OF GOD concert in Prague. To protect himself, singer Randy Blythe pushed the fan away. Unbeknownst to Blythe, the young man hit his head on the floor when he fell and later died from the injury. Blythe was promptly incarcerated on charges carrying a prison term of five to ten years. Thirty-seven days later, he was released on bail to await trial. Although legal experts told him not to return to the Czech Republic to face the charges, Blythe explained that he 'could not run away from this problem while the grieving family of a dead young man searched hopelessly for answers that [he] might help provide.'"

In "Dark Days", Blythe tells the story of his incarceration and the wild life that led up to it. As he explains, "Most substance-abuse books end with the author getting sober. My book starts there."