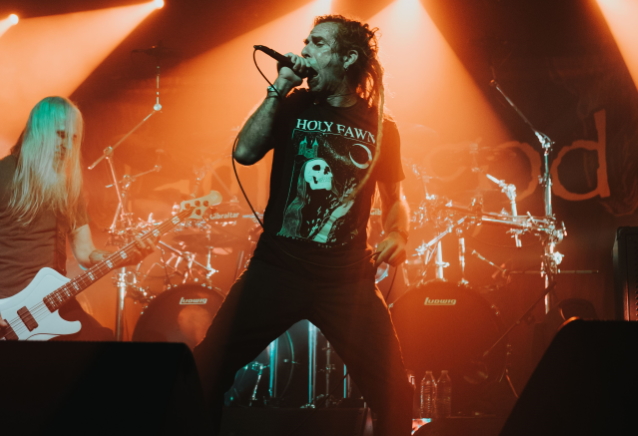 LAMB OF GOD has recruited Phil Demmel (VIO-LENCE, ex-MACHINE HEAD) to play guitar for the band on this year's ShipRocked cruise, which set sail from Galveston, Texas on January 22 and includes stops in Costa Maya and Cozumel, Mexico. Demmel is filling in for LAMB OF GOD's regular guitarist Willie Adler who was unable to make the trip for reasons that have not been disclosed.

Since Carnival Cruise Line's Have Fun Be Safe protocols and procedures currently require that guests are fully vaccinated and tested before their cruise on all sailings through February 28, 2022, some fans have speculated that Adler's COVID-19 vaccination status was the main reason he was excluded from this year's ShipRocked.

Fan-filmed video footage and photos of LAMB OF GOD's January 24 performance aboard the Carnival Breeze ship can be seen below.

Last October, LAMB OF GOD frontman Randy Blythe urged everyone coming to see his band perform to get vaccinated against COVID-19. "I believe in fucking science," he said during an appearance on MACHINE HEAD frontman Robb Flynn's "No Fuckin' Regrets With Robb Flynn" podcast. "And I have friends who are doctors and scientists and nurses, and these are people I'm going to listen to — not someone on social media, not another musician, not a talking head on CNN, Fox News, USA Today, PBS; none of this stuff. I talk to my friends who are molecular biologists, immunologists, emergency room doctors, and I have friends who are nurses, one of whom works in a COVID ward — and someone very close to me. These are not my friends' neighbors' second cousin's buddy [saying], 'I heard this or that or the other'; these are people who are friends of mine I talk to directly. They're, like, 'This is real. This is the science. This is the data. This is what I see. These are the people I see dying.' So I'm going to listen to my friends 'cause they're a lot smarter than me.

Lamb of God for Mike Buchan

Ship Shows with Lamb of God

Lamb of God on the main stage, absolutely insane set

Then the rains came and Lamb of God plowed thru it and the audience was dancing and it was tribal. One of my favorite...