Finnish melodic rock quartet LAND OF TALES has finished filming a video for the song "Silence". Photos from the video shoot can be found at this location. One of the pictures is available below.

LAND OF TALES's self-titled debut album was released in July via Frontiers Records.

According to a press release, "LAND OF TALES is a brand new band masterminded by two guys, Kristian (vocals and guitar) and Palle (keyboards),who started doing music together since the tender age of six and seven. They have been playing together for fifteen years in a band called NAISKALA. However all the time, there was a constant urge to make more adult-oriented rock music, sung in English.

"Kristian finally started writing songs in this new direction during November 2006. Meanwhile Petri Lahtinen and Mika Mäkiranta wrote the lyrics for the tales. They uploaded the songs on their MySpace page, getting a fabulous response from all over the world. International Fan Clubs have been already founded in Germany and overseas. LAND OF TALES therefore started shopping their music around, until they caught the interest of Frontiers Records who signed them in the fall of 2007.

"The LAND OF TALES sound is an equal union of keyboards and guitar, crafted with catchy melodies and BIG choruses! The result is a somewhat original and peculiar approach to songwriting and music that makes them stand apart from many other bands of the melodic rock genre."

Commented Kristian: "The new album sounds exactly how we wanted it to sound. I think that the production sounds like classic stadium rock but still fresh. It is great that people can finally hear LAND OF TALES' melodic songs." 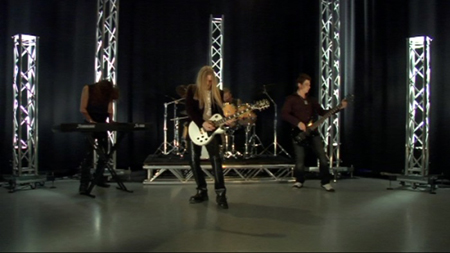