LARS ULRICH Talks 'Blackened' Whiskey: 'We Didn't Want To Just Slap A METALLICA Logo On Something'

METALLICA drummer Lars Ulrich spoke to Forbes about the band's recently launched brand of whiskey. Dubbed Blackened after a track on the group's 1988 album "...And Justice For All", the spirit is a blend of American bourbon, rye, and whiskey that wasn't just barrel-aged, but also sound-aged to the group's own music. But what truly makes Blackened is "Black Noise" — billed as a patent-pending, "sonic-enhancement" process that uses METALLICA's music to help "shape the flavor" of the whiskey.

Asked what made METALLICA decide to do a whiskey, Ulrich said: "We are always interested in connecting with our fans. It's not just limited to music. Movies, concerts, t-shirts, letting them download the concert they just saw 24 hours ago. We thought about beverages a few years ago, then hired a team. We like to control things, pull the strings and be financially independent. And we didn't want to just slap a METALLICA logo on something — I don't want to look my fans in the eyes and tell them this is coming out of my DNA if I don't feel good about it."

Ulrich also talked about METALLICA's chemistry with Dave Pickerell, the acclaimed master distiller and blender behind Blackened. Pickerell died in November in San Francisco where he was scheduled to take part in the annual WhiskyFest event.

"When you go on these journeys together with your band, there are certain people you hook up with along the way where you have an instant kinship. As soon as I met him, I felt incredibly comfortable and connected to him. He had passion, creativity and curiosity. At lot of us in this world are sort of loners, trying to connect and fit it, and we connect with each other. Sometimes you never pass the level of acquaintance with someone. Five minutes after meeting him, I trusted him completely, which is rare. I still haven't be able to process that he's passed."

Pickerell, along with a team of scientists and Sweet Amber Distilling, used the power of music on the black brandy barrels where Blackened was stored for maturation. Soundwaves impact chemical reactions taking place in the aging whiskey.

"I knew that ultra-low frequency has the energy to move molecules," Pickerell said.

Subwoofers were added and the result was amazing: that whiskey pulled the good caramels and lactones from the insides of the barrel walls much faster than it would normally have. And the flavor is astonishingly different.

Different music provided different results. As anticipated, to each batch of Blackened has allocated a different playlist, handpicked by METALLICA's members. Soon after this discovery, Sweet Amber applied for a patent for the "Black Noise" sonic enhancement process that uses low frequencies to enhance the taste by vibrating the casks with music.

Pickerell said: "As the ligaments in the wood break down, they form six different compounds that all taste and smell like vanilla — one actually is vanilla. If you can cause the interaction between the whiskey and the wood to be enhanced by sonic vibration, you can cause the whiskey to pull extra goodies out of the wood." Ultimately, he said, it gives the beverage a deeper caramel note.

Blackened was rolled out in California, Wisconsin, New York and Florida for a suggested retail price of $43. 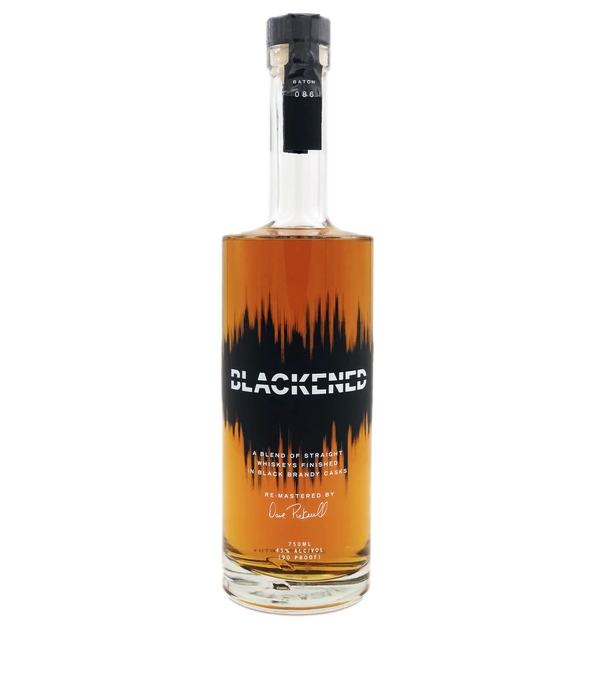