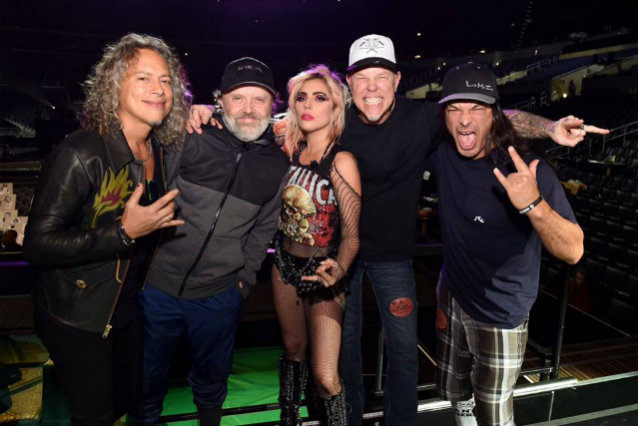 LARS ULRICH: We Were Talking About Making LADY GAGA A Permanent Member Of METALLICA

METALLICA's collaboration with pop superstar Lady Gaga at the 59th annual Grammy Awards in Los Angeles Sunday night (February 12) turned into something of a disaster when the Grammy sound crew did not turn frontman James Hetfield's mic on, forcing him to share the mic with Gaga after the first verse and chorus. That seemed to take the steam out of the song, although a scantily clad Gaga gamely gyrated around the stage and even dove into the audience at one point.

The performance was not helped by the other onstage dancers feebly pretending to be metalheads, and as a further humiliation, presenter Laverne Cox did not even introduce METALLICA by name. At the end of the song, a visibly angry Hetfield hurled his guitar at a road crew member while kicking over his mic stand.

Prior to the performance, METALLICA guitarist Kirk Hammett spoke about how the Gaga collaboration came about. He said (see video below): "You know how the Grammys always like to have their duets thing. And so when it was suggested that Lady Gaga do it, we thought, 'That's interesting.' But when she came down to actually work with us with the song last night, it turned out really, really, really well. I mean, she was really open and willing to work with different arrangements and see what worked well over the course of the song. And it was great. She was really, really great to work with last night."

Added bassist Robert Trujillo: "She's got a lot of edge and attitude, which is important for what we do. And she actually came to see us play… We did a small show at the Henry Fonda theater [in Los Angeles], and she saw the whole show, stayed for it. She really enjoyed it, she was rocking out, and then somehow, magically, this all started to happen."

METALLICA drummer Lars Ulrich spoke to "Access Hollywood" on Saturday about what fans could expect from the band's Grammy performance. He said (see video below): "It's gonna be high energy. When we were done with our rehearsal yesterday, my manager came up and said, 'This may be the heaviest song that's ever been played at the Grammys ever' — even heavier than the last four of five times METALLICA were there. So we're pretty psyched that we get… [Grammy Awards producer] Ken [Ehrlich] gives us carte blanche to go heavier and heavier each time. And now we've got a new lead singer — well, a new co-lead singer, is a better way of saying it — so we were talking earlier about maybe making her a permanent member of METALLICA and being a five-piece from now on, so we'll see."

Ulrich also praised Lady Gaga's Super Bowl halftime show, saying: "She killed it. I mean, it was unbelievable. I think that at a time right now where everything in this country is so divisive, the one thing that everybody could agree on last week was that she just nailed it better than anybody ever, so it was awesome."

Lady Gaga spoke to Apple Music earlier in the month about how the idea came about for her to perform with METALLICA at the Grammy Awards. Gaga explained that she "was at [actor] Bradley's [Cooper] house with Lars, and we were just, like, hanging out…" She added, "I've gotta tell you something: I went to see [METALLICA] live. I mean, I've seen them a couple of times live, but I saw them live recently, and we were watching the show and I'll tell you something, those guys play better than they've ever played in their whole lives."